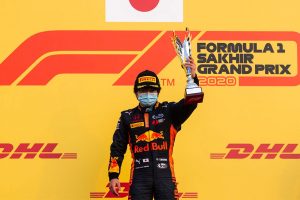 Martin Brundle said that, while he wouldn’t necessarily have said Yuki Tsunoda was a “stand-out” driver in Formula 2, his confidence and speed on his step up to Formula 1 makes him a “great attribute” to the sport.

The young Japanese driver is the first in Formula 1 to have been born in the 21st century, and he says he hopes to follow countryman and golfer Hideki Matsuyama in bringing major success to Japanese sport this year.

After impressing on debut in Bahrain and picking up his first Formula 1 points to boot, his weekend in Imola was a tougher affair, after crashing out in Q1 and spinning off in the race after the Safety Car restart – although he did make up plenty of places beforehand after starting at the back.

Mick Schumacher won the Formula 2 title in 2020 and Tsunoda picked up three race wins on his way to finishing P3 in the championship, but Brundle said that, while he didn’t appear to be the class of the field, his transition to F1 has been seamless.

“He looked very good in Formula 2 but I’m not sure you would have picked him out as a stand-out amongst some other very good drivers,” Brundle said on Sky Sports F1.

“It just reminds you that sport at any level, particularly the highest level, is all about the head as much as the talent.

“He’s entered this paddock at 20 years old and just has a confidence that belies his experience and clearly has speed and talent to go with it, so it’s wonderful. He’s a great attribute to the business.”

Damon Hill also praised Tsunoda for how he has made the transition to Formula 1, with the 1996 World Champion saying that the younger generation seem to be ready to make the step up and make their presence known from the start.

“Yuki has come in and appears completely comfortable,” said Hill. “This new generation of drivers seems incredibly well prepared from every angle, whether it’s dealing with the media or technology and so forth.

“They are complete packages when they arrive, they don’t look out of place or uncomfortable and they are here to make a name for themselves. You never know, Gasly did it in an AlphaTauri so it could be possible, a Japanese winner of the Grand Prix.”