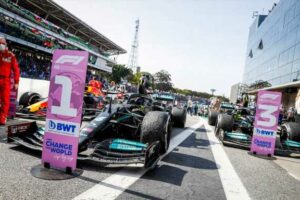 Martin Brundle thinks Mercedes should think about giving Lewis Hamilton one more new engine this season – despite the grid penalty that goes with it.

Hamilton was fitted with his fifth internal combustion engine of the campaign at the Sao Paulo Grand Prix. Three is the maximum permitted, four incurs a 10-place grid drop and five or more a five-place penalty.

The fourth engine meant a P11 start in Turkey and a P5 finish. But in Brazil, the seven-time World Champion won from 10th on the grid, passing his title rival Max Verstappen to close his points deficit to the Dutchman to 14 with three races remaining.

The previous day, in the sprint, he had improved from 20th on the grid – having been excluded from qualifying for a rear-wing illegality – by overtaking 15 cars.

YOU CAN DO ANYTHING YOU PUT YOUR MIND TO! This weekend is proof. We fought this battle on the track and I couldn’t be more proud of @mercedesamgf1 and my incredible teammate @valtteribottas who I couldn’t do this without. EU AMO BRASIL 🇧🇷🇧🇷🇧🇷 We keep fighting, keep pushing. pic.twitter.com/CBD7QbIt1J

Given the sheer pace of the Mercedes at Interlagos, it provokes the thought that Hamilton could theoretically take a grid penalty at each of Qatar, Saudi Arabia and Abu Dhabi – all circuits expected to suit his car – and still win every time.

If the 36-year-old Briton does win all of those three races, he would break the record he holds jointly with Michael Schumacher for the highest number of World Championship triumphs.

Mercedes team principal Toto Wolff said in Brazil that Hamilton would have only the two existing engines in his pool until the end of the season, even though their performance will only degrade from what they had at the start of their cycle.

How feasible it would be, logistically and financially, to add others only Mercedes know, but Sky F1 pundit Brundle believes it could be worth doing in the Abu Dhabi finale, for example.

“This story has plenty more to run and surely on that form, it’s worth Merc considering a new internal combustion engine for the final big showdown,” said Brundle in his Sky Sports column.

“A five-place grid drop could be well worth it, given Lewis passed all the other 19 cars on the grid, 16 of them at least twice.”

Another ex-F1 racer, Robert Doornbos, is less convinced, however, highlighting the “risk” factor of starting a few rows back rather than at the front.

“You are in the thick of the midfield traffic and you have to keep your car in one piece,” said the Dutchman, quoted by Motorsport.com.

“In the midfield, you always have more risk than when you start first or second. You have cars behind you and in front of you.

“The drivers who are there also often have less to lose, so there are simply more accidents in the middle than at the front.”