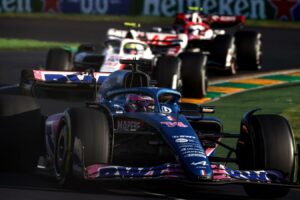 Martin Brundle thinks Alpine “flattered to deceive” with their pace at the Australian Grand Prix, which promised them far more than it delivered.

There were suggestions Fernando Alonso could have been on pole position in Melbourne but for a crash caused by a hydraulic failure while on a very promising lap in Q3.

Starting 10th on the grid instead, the Spaniard began the race on hard tyres and was going along nicely enough until he stopped for a set of the medium compound under the Safety Car on lap 40.

However, he could not make the gains he wanted on that rubber, suffered from graining and ended up making a second stop, finishing last of the 17 runners remaining.

“Fernando Alonso, who would have started on the first two rows without his downshift issues in qualifying, was very fast for the whole event but came away with nothing and finished 17th and last, having run as high as fourth by not stopping behind the Safety Car after a late stop to fit tyres and go for fastest lap, which Leclerc denied him on his last victorious tour.

“It was that kind of day for Fernando, who is driving with a lot of speed and passion.”

As for Leclerc, the Sky F1 pundit and co-commentator believes he has everything under control with the all-new Ferrari having taken the grand slam of pole position, leading every lap for the win and setting the fastest lap of the grand prix at Albert Park.

The Monegasque leads the World Championship by 34 points after a near-perfect start to the campaign and is now odds-on favourite for the title.

“Leclerc has stepped up to a higher plane, delivering speed with consistency and seemingly always a half a step ahead of this car, rather than close to the edge of the car’s limit and the occasional heavy shunt as we’ve seen in the past,” said Brundle.

“The new regulations suit him and he has developed confidence and increased self-belief.