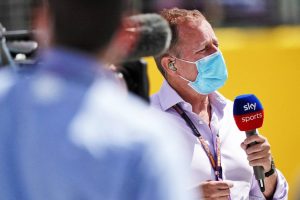 Martin Brundle has recalled his most memorable gridwalk moment after confirming he is staying with Sky F1 long-term.

The 61-year-old, who made 158 F1 race starts of his own, has become the doyen of motorsport broadcasting to UK audiences since the retirement, and sadly the recent passing, of Murray Walker.

Besides co-commentary and punditry duties, Brundle has become renowned for his pre-race gridwalks in which he squeezes his way between the cars to ‘doorstep’ any driver, team principal or celebrity willing to give him a few seconds of their precious time.

Brundle has admitted he did not miss the gridwalks in 2020 – which were put on hold for social distancing reasons due to the health pandemic – but there should be plenty more in the future when life returns to normal because he has “just signed a new long-term contract with Sky”.

“It’s my alter ego,” he told the Press Association. “It’s nine minutes of unscripted, unrehearsed, car-crash television. I turn into this person I don’t recognise, butting in and interrupting. In 24 years, I don’t think I’ve ever watched one back.”

A condensed F1 test was a big success. Can imagine that, with a little extra track time for the all new 2022 cars, pre-season testing next year will be effectively an additional F1 Event for the calendar. https://t.co/NroFTpLRFI

But does he have a favourite? “Ozzy Osbourne in Montreal,” he replied without a moment’s hesitation.

“He wasn’t fully with it, shall we say. I asked him a question and he gave me a very long, incomprehensible answer.

“It went out live to millions of people and I got in trouble because I was supposed to have known he would swear if I asked that question.”

In reiterating a previous fear that “someone will come along and blow me out of the water” one day in terms of their knowledge and broadcasting talent, Brundle is happy that Sky F1 continue to put their faith in him as their most authoritative voice on all matters F1.

“I don’t feel vulnerable at all, I feel lucky I’ve lasted this long,” said the nine-time podium finisher for Benetton, Ligier and McLaren, who joined Walker in the commentary box full time in 1997.

“It never occurred to me that they will say no, but one day they will. I feel slightly shocked and slightly terrified that this is my 25th season but what would Lewis Hamilton say? I feel blessed.”