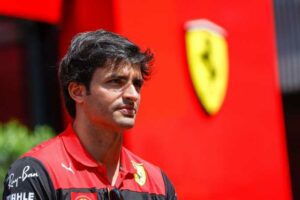 Three retirements in nine races so far this season has ensured the Spaniard has not truly entered the title picture at all but, with Charles Leclerc effectively out of race winning contention in Canada due to a new engine being fitted, the spotlight was firmly on the former Toro Rosso, Renault and McLaren man to lead the charge for Ferrari.

He almost delivered, too, playing his part in a tense final showdown with World Championship leader Max Verstappen at the Circuit Gilles Villeneuve, consistently staying within DRS range but ultimately unable to get close enough to pass the dominant Red Bull driver.

And Brundle, who has occasionally felt his praise for Sainz has not been echoed by others up and down the F1 paddock, thinks the Spaniard is not too far away from breaking through this current glass ceiling.

Grazie team for the hard
work! Let’s go get the next one. 💪🏼

“It was a masterclass drive from the reigning World Champion and now comfortable World Championship leader Max Verstappen, but Carlos Sainz in the Ferrari pushed him very hard for the last 15 laps,” Brundle said in his latest Sky F1 column.

“Carlos is like Lando Norris and George Russell in that he’s ready to win GPs but those victories just keep eluding him for varied reasons.

“I’ve always been a supporter of Carlos and sometimes I felt like a lone voice in the paddock, but he’s very good – especially during races.

“The final hurdle for him is to combine his talent, sheer determination, aggression and experience into greater pin-point accuracy and consistency.

“The car will then relentlessly travel forward rather than occasionally sideways, and as soon as he wins the first GP he’ll be away.

“It was great to see those two [Verstappen and Sainz] slugging it out.”

Leclerc, meanwhile, was able to battle his way from the back of the grid to a P5 finish in Montreal, but he lost further precious ground on Verstappen who is sitting very pretty at the top of the World Championship standings.

Brundle thinks the set-up of Leclerc’s Ferrari is the reason why further progress up the field could not be made.

He noted: “Leclerc, on the last row on the starting grid for Ferrari due to engine penalties, was trimmed lower on downforce for good straight-line speed, but that only seemed to hurt him with poor rear grip off the corners – so negating the extra speed.

“He spent an age in traffic but occasional clear-air speed and the final safety car got him up to fifth, albeit losing another 15 points to Verstappen.”