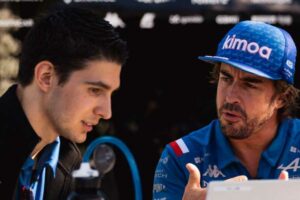 Martin Brundle believes that, while Fernando Alonso moving to Aston Martin is in part down to his ‘multi-year’ contract, his battles with Esteban Ocon will not have helped matters.

Alonso was unhappy on team radio at the start of the weekend’s Hungarian Grand Prix, after Ocon moved across and blocked his team-mate at the start and hindered his progress.

“Never in my life I saw a defence like Esteban. Never,” was the two-time World Champion’s assessment of the move as his Alpine colleague moved right in front of him, which he described after the race as being “quite aggressive” on Ocon’s part.

The in-team fight at Alpine continued in the race as well, with their duel having an eventual negative effect as they ran wide at Turn 2, allowing McLaren’s Daniel Ricciardo to swoop past the pair of them in one go.

This is not the first time this season there has been a spicy battle between the two either, with a heated duel in Saudi Arabia also almost seeing sparks fly as they fought tooth-and-nail for several laps.

Brundle said that, while several factors will have been in play with Alonso’s shock decision to join Aston Martin, Ocon’s stout defending and forceful attacking will have had a negative impact at the team, not least in maximising their potential results in losing time through their squabbles.

Does anyone else really, really want Netflix to be in the Alpine debrief tonight?#HungarianGP 🇭🇺 #F1

“It appears that Alpine couldn’t or wouldn’t offer Alonso a two-year deal, and his Aston Martin deal is officially described as multi-year,” Brundle wrote in his Sky Sports post-race column.

“He’s also been fairly underwhelmed at how punchy his team-mate Esteban Ocon has been towards him in combat at Alpine rather than turning all their guns on their rivals.

“Fernando is a force of nature on and off the track and he will push the team very hard. He’s mellowed a little these days but there could easily be fireworks as he joins the Stroll family ‘firm’.”

Is Ocon an exception to the rule in Alonso’s career?

It’s hard to disagree with Brundle’s underlying point on Ocon, in part because Alonso has been accustomed to having much more pliant team-mates throughout his Formula 1 career.

The only other true example of a heated season-long battle in the same garage can be traced back to *that* year alongside Lewis Hamilton at McLaren, but since then, Alonso has often been so far ahead of his team-mates that he has never been fought against in the same way.

The likes of Nelson Piquet Jr, Felipe Massa, Giancarlo Fisichella, Kimi Raikkonen, Stoffel Vandoorne and even Jenson Button were all largely tucked firmly inside Alonso’s pocket in their time together, so Ocon’s robustness is an unlikely outlier in his career.

What Ocon has done throughout his career, to his credit, is never accepting playing second fiddle within his team – though the down side comes with the aggression he has shown at times to prove that point.

You only have to look back to his multiple scrapes with Sergio Perez through the 2017 season, which saw a breakdown in their relationship at the time, as an example of Ocon’s unwillingness to back down.

There’s no doubt that the promise of more than one extra year in Formula 1 and what is likely to be a handy pay packet will have played their part in the move…could Alonso have an ‘easier’ time against Lance Stroll next year?

Maybe, but it will be intriguing to find out.