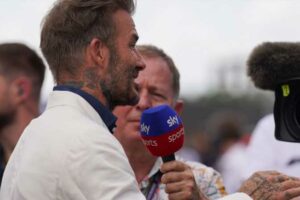 He started 158 grand prix and claimed nine podium finishes and yet Martin Brundle is best known as the chap who does the, at times, chaotic grid walks on Sky Sports before the races.

The former F1 driver turned pundit has been doing the grid walk for 25 years, interviewing drivers and celebrities.

But while it is perfectly understandable that there are times the former don’t want to speak to him, after all they are at work, he has been blocked – and rather rudely – by celebrities in recent years.

Last season Megan Thee Stallion’s bodyguard blocked the commentator, resulting in Formula 1 banning celeb’s bodyguards from joining them on the grid, while last month he had his cringiest grid walk yet.

On a grid packed by those want to see and been seen, Brundle mistook basketball player Paolo Banchero for quarterback Patrick Mahomes, was given the cold shoulder by Serena and Venus Williams and had to deal with Pharrell Williams trying to plug Richard Mille watches.

It was the stuff of nightmares.

Brundle took to social media to address it.

“There’s a reason why I’ve never watched back an F1 gridwalk in a quarter of a century of doing them,” he said.

“You have no idea how much I dislike doing them but somehow those crazy moments have defined my professional career. Oh well, that’s the way it is.”

However, the 62-year-old admits it “annoys” him that he is best known for those grid walks than he is for his nine F1 podiums.

“I had nine podiums as a F1 driver. I was a world sportscar champion, a Le Mans winner, a Daytona winner. I like to think I’ve called some pretty good races in my time. Worked with the great Murray Walker…

“But there’s no doubt about it. I’m most famous now for gridwalks. And frankly it annoys me! I don’t really want to be remembered for getting the wrong person, or being ignored, or being mucked about by some bodyguards.

“It [the gridwalk] has grown a life of its own,” he added. “But I shouldn’t knock it because it’s become my USP.

“In America a couple of weeks ago, kids were coming up and going ‘Man, we love you.’ And I’m like ‘How do you know me?’ And of course it’s through TikTok, or some crazy gridwalk moment.