Mark Webber: Romain Grosjean 'borderline out of his depth' 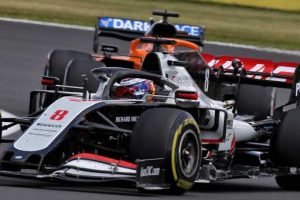 With his antics at Silverstone labelled “sketchy” and “very dangerous” by his rivals, Mark Webber has questioned whether Romain Grosjean knows how to race.

The Frenchman was in the thick of it at the British Grand Prix after Haas’ decision not to pit him behind the day’s second Safety Car elevated him to fifth.

That put a train of cars behind the Haas, which included Carlos Sainz and Daniel Ricciardo.

While Ricciardo said his double block was “sketchy”, Sainz felt it was leaning more towards “dangerous” when he tried to pass.

Grosjean moving over on Sainz almost caused an aeroplane crash on the one racetrack we go every year to that used to be an airfield. Yikes. #BritishGP pic.twitter.com/BiOtBwxPe1

Former F1 driver Webber reckons Grosjean has a “gross misunderstanding” of what it means to go racing.

“I don’t think he understands the rules of engagement,” the Aussie told Channel 4.

“He is moving around very late in defending. He is saying he is leaving a car’s width on the inside, which technically he is, but this weaving in the middle of the road at high speed…he has got to be even further across to show his intention earlier.

“I think Grosjean has a gross misunderstanding of what current Grand Prix racing is all about in terms of wheel-to-wheel combat.

“He’s the chairman of the GPDA. He should know the rules.

“For me, Grosjean is borderline out of his depth in Formula 1.”

The Scot added: “Well, he’s had enough cracks at it. He did have success in the lower Formulas but he is just a repeat offender.

“It’s frustrating because there are other guys out there who can pull off manoeuvres and race hard without any of the black and white flags.

“The stewards are on to Romain. They are not just throwing those flags out willy nilly and that is the first black and white flag we have seen in quite some time.”

Grosjean pulls another late defensive swerve on Ricciardo this time! A shame to see him regress to doing some of the driving he's been memed for in the past. #BritishGP https://t.co/nFOfRf1kQM pic.twitter.com/GaZOhdlWYq

Despite his rivals’ words, the stewards let Grosjean off with nothing more severe than a warning.

“The stewards reviewed this case with Grosjean and Ricciardo. They also reviewed the video of the incident between them. Grosjean explained that in both cases his moves were before the braking zone, although in the second case it was closer.

“When it was put to the drivers that these were late moves in relation to the approaching car, or “Movement in Reaction” and also potentially dangerous, they agreed on this as a general principal.

“Ricciardo agreed that this situation, while close, was manageable by him as the following driver.

“The Stewards issued a Warning, with the admonition that late movement in reaction to drivers following is also considered potentially dangerous and will be scrutinised by the Stewards.”