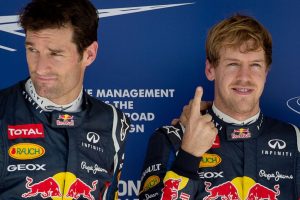 Ex-Red Bull driver Mark Webber says Sebastian Vettel may regret his role in the Multi-21 saga, but the Aussie was no “angel” either.

It was from 2010 when Red Bull’s domination of Formula 1 began, lasting for four years with Vettel taking all four Drivers’ Championships on offer, while Red Bull achieved the same success in the Constructors’ Championship.

Although not official, Webber was the clear No.2 to Red Bull’s star academy graduate, but this was a relationship which was pushed time and time again before it eventually imploded.

The first major meltdown arrived in Turkey after the pair crashed while fighting for the lead, an incident which cost the team a comfortable one-two finish – the media were on Webber’s side, but Red Bull unsurprisingly defended their future World Champion.

And from there the ‘Multi-21’ controversy at the 2013 Malaysian GP where Vettel blatantly ignored team orders to forcefully pass Webber for the win, finished this already broken partnership for good.

And to this day Webber still isn’t sure whether or not Vettel regrets his role in the controversy.

But either way, Webber acknowledged that he was “no angel” either during their time together at Red Bull.

“I was leading, and actually to be completely frank, Seb was… sort of out of position, if you like, from the early calls in the race, and trying to clear Lewis [Hamilton] during the Grand Prix,” he told fellow ex-F1 driver David Coulthard on F1 unscripted.

“One of my biggest regrets: I should have turned my engine right back up [when Vettel began attacking him]. But instinctively, I’m like ‘well we should be just closing this race out – we’ve only got three or four or five laps to go and we’re fighting each other and using a lot of material and machinery’.

“Because it was clear for that particular race that we should be shutting the Grand Prix down.

“Deep down, who knows if Sebastian still to this day regrets that particular Grand Prix? Maybe he doesn’t, I’m not sure. But look, I wasn’t an angel at certain other events here and there.”

Webber would retire from Formula 1 at the end of the 2013 season, while just one year later Vettel left Red Bull to join Ferrari.