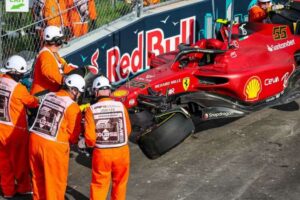 Mario Andretti said Carlos Sainz cannot seem to catch a break at the moment, after he crashed out of free practice in Miami on Friday.

Sainz had been at the top of the leaderboard in the early part of FP2, but crashed out and brought out the red flag in the process, with the damage to his Ferrari ending his session entirely.

The 27-year-old ran through the left-hander of Turn 13, but the rear of his car appeared to under-rotate and he quickly found himself facing backwards in the wall at the entry of Turn 14.

Sainz apologised over team radio and admitted he didn’t know what had happened, but former World Champion Andretti has backed him to put things right over time, despite his lack of luck at the moment.

“Sometimes you just can’t catch a breath,” Andretti said on commentary duty for Sky Sports F1 just after Sainz’s crash. “You’re trying but you still have to be right on top of it all, and the competition doesn’t get any softer.

“So he’s on it, his team-mate [Charles Leclerc] obviously is always right there. I hate to see it, obviously we all do, but he’ll get it right.”

Andretti knows as well as anyone about the pressure of driving under the Ferrari badge, but he feels that any pressure given to Sainz by the tifosi will quickly be overshadowed by the motivation from within from the Spaniard.

Regardless of his accidents too, Andretti hopes to see Sainz continue to be fully committed to the cause, and expects to see him come through his tough patch.

“Any team, you can sugar-coat it any way you like. I don’t think they have to put any more pressure on him than he has on himself, quite honestly,” said Andretti.

“The fact that he’s giving ten tenths [of effort] throughout is better than just lagging behind, [in the] midfield and so forth.

“He’s up there, he’s capable, it’s just about maybe just refining certain aspects of it. I don’t like to slow drivers down to the point that they lose that ‘edge’. You can see that he’s capable, so he’ll be alright.”

Regarding the level of expectation placed upon Ferrari as a team, the 1978 World Champion thinks that only served to raise his game – and anyone feeling the opposite effects of it should consider if they’re up to the challenge.

“Yes you do [feel pressure], but that’s the right kind of pressure, though,” Andretti explained. “They expect you to bring results, nothing wrong with that. You expect that of yourself.

“But if you let that get to you in a negative way, then you’d better rethink a bit.”