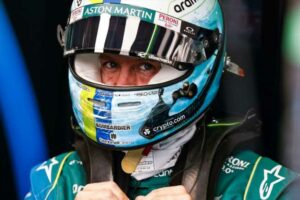 Sebastian Vettel will say “bye-bye” to Aston Martin at the end of this season, that’s the opinion of former F1 driver turned pundit Marc Surer.

And that, he adds, will probably be the end of his Formula 1 career.

Vettel is out of contract with Aston Martin at the end of this season and although team boss Mike Krack has made it known he’d like to retain the German, Vettel says his future is dependent on results.

Having missed the first two races of this season with Covid, Vettel has managed just one top-ten showing in three races with few signs that Aston Martin are getting it right.

Surer reckons this could be the end of the road.

“The team doesn’t look as if it can become World Champion,” he told Motorsport-total.com. “So what should he do? Remain there?”

He then answered his own question: “[Vettel] will fulfil his contract and then he’ll say bye-bye.”

Surer, though, doubts he’ll be heading to another team as none of the top teams would see a reason to sign the 34-year-old.

Saying he “can’t imagine which top team” would sign the four-time world Champion, the German added: “He’s gone from Ferrari, he had the chance at Aston Martin of all things, so it’s not working now either.

“When things are going normally, he beats Stroll, and we know that Perez, for example, always found it difficult to beat Stroll. So that’s a level he still has.

“It’s more a question of motivation, if you know I’m fighting for tenth place, is that really the motivation for a four-time World Champion to give everything? I don’t know.”

But don’t for a moment think that Vettel will shirk his responsibilities between now and the end of the season.

Although the car “doesn’t work”, Surer says that he came back from Covid and is “still driving speaks for him because he’s helping the team.

“He’s trying to move the team forward and there are already a few signs that things are improving. So he is doing his job.”

“He could have thrown in the towel and no one would have blamed him, except maybe the team.”

Vettel has made it clear that whether or not he continues with Aston Martin next season, or even stays in Formula 1, is solely dependent on the team’s results.

“I don’t know,” he recently said when asked about his 2023 plans. “No secrets. It will depend on obviously how this year goes and then take it from there.

“But will choose the path that we climb, which will determine the next three-four years – so that’s why I feel it’s really important to focus on that and it takes all the attention.

“And then one day there will be a day for all of us where this journey ends and some other journey will start – whatever that might be.”