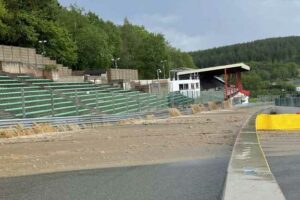 Eau Rouge became Eau Brun on late Friday afternoon at the iconic Spa circuit after a storm caused major flooding in the area.

The home of the Belgian Grand Prix was due to host some Euro Racing but, the cars of the Legends Cars Cup, the Lotus Cup Europe, the Supercar Challenge/GT and Prototype Challenge and the Belcar Endurance Championship were all left firmly stuck in the garages after Spa resembled more of a water park rather than a race track.

Circuit officials stated: ‘These bad weather conditions caused significant flooding between the Source turn and Raidillon, leading to the end of activities on the circuit.

‘The track having been impacted, the Circuit de Spa-Francorchamps and the Royal Automobile Club de Spa have decided to put an end to the Spa Euro Race meeting, in order to ensure the safety of all.

‘The Circuit de Spa-Francorchamps is now working on the restoration of the track in order to ensure the resumption of its activities as soon as possible.’

Had he still have been racing, Jenson Button would have no doubt fancied his chances switching over to slicks…