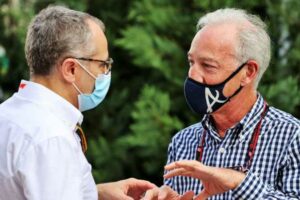 Greg Maffei, president of Liberty Media, has hinted F1 could expand beyond 10 teams – but does not see a “pressing need”.

Ten teams and 20 cars have comprised the Formula 1 field since Manor’s exit in 2017, although there is interest from new aspirants.

At the head of that list is Michael Andretti, who is eager to field a new team from 2024 to add to the operations he runs in a variety of other motorsport series.

The American has submitted an application to that effect but is still waiting to hear back from the FIA about whether his attempt will be successful.

The delay is understood to stem from the reluctance of certain teams to welcome a new enterprise on the basis it could affect their revenue, even though a new constructor would have to pay an ‘anti-dilution’ fee of $200m.

Maffei has said the sport is looking at increasing the number of teams, although it is clear a return to the days back in the early 1990s when pre-qualifying had to take place due to the excess number of entrants is extremely unlikely to happen.

“There’s a potential we may increase the teams over time,” said Maffei at a Bloomberg event ahead of the Miami Grand Prix, quoted by The Race.

“There are a lot of people who would like us to do it. Most of them want to buy in.

“But we have not felt that need.”

Maffei pointed to garage space at some circuits being an issue because “there are places that don’t have more than 10”, but that would surely not be an insurmountable obstacle.

Of those opposed to a competitive expansion, McLaren are not among them as their CEO, Zak Brown, is a friend of Andretti.

“The pushback from some teams has been more of a fiscal pushback because ultimately they chew into the prize fund,” said Brown.

“They [a new team] have to write a pretty significant cheque on the front end, which then means the dilution of money is a few years out.

“And if you believe they are additive to the sport, I think they will put more in through helping to build the sport, maybe an increased television contract in America, more sponsorship.

“And by the time the dilution kicked in, they would have helped to contribute to more growth.

“I think we have a very long-term view on these things, that economically I think things would be okay.”