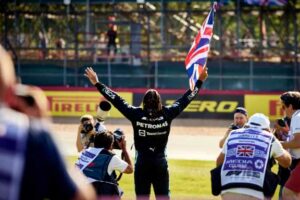 Robert Doornbos is the latest to criticise Lewis Hamilton’s post-race celebrations, saying it was “sickening” to do so while Max Verstappen was in hospital.

It’s been written about many times in the past few days with just about everyone voicing an opinion on the big one – Verstappen and Hamilton’s British Grand Prix crash.

Fighting for the lead on the opening lap, the two clashed at Copse as Hamilton tried to pass up the inside, missed the apex and made contract.

With the contact putting Verstappen into the tyre barrier at 51G, and subsequently into the hospital for further checks after he reported feeling dizzy, tensions have been running high with Red Bull saying they are still considering legal action.

The mood in the Milton Keynes camp, as well as Verstappen’s home country, wasn’t helped by Hamilton’s post-race celebrations with the Brit marking his victory with his fans.

Verstappen called that “disrespectful” while, according to grandpx.news, Doornbos has told Ziggo Sport that the “partying” while Verstappen was in hospital was “sickening”.

He added: “He went from hero to zero as a sportsman in that moment.

“Winning your home race is special, but with a penalty, a team-mate who lets you pass and knocking his rival off, I didn’t think it was fitting.”

“He shouldn’t have been partying,” he said. “The team should have told him that Max was in hospital so he shouldn’t do that for a while. That was really not good.

“If you preach about respect all year long, and then you want that respect from someone else, then you have to give it out as well.”

What a feeling this must be! #BritishGP 🇬🇧 #F1 pic.twitter.com/mLL9V4POnZ

Doornbos has backed Verstappen to bounce back at the final race before the summer break, the Hungrian GP.

“I do believe that Max is so strong this year that he will park this and leave it at Silverstone,” he said.

“Actually, he has to let it go and keep going. He must allow the emotion to subside.”

Verstappen goes into the Hungarian race with his lead in the championship slashed to just eight points.