Lewis Hamilton: We're not 'miles off' Red Bull and Ferrari at Silverstone 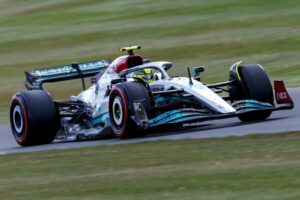 Ending Friday at Silverstone in P2, Lewis Hamilton feels the upgraded Mercedes W13 is not far off the leading pace of Ferrari and Red Bull.

FP1 did not feature a great deal of meaningful running thanks to heavy showers impacting parts of the track, so with several teams, including Mercedes, bringing upgrades to the British Grand Prix, it meant that FP2 was action-packed in a bid to make up for lost time.

And Hamilton would give Mercedes great reason for optimism, recording the second-fastest time, only 0.163s slower than Ferrari’s Carlos Sainz who set the pace.

So, comparing the Silverstone track surface to the one in Barcelona, where Mercedes delivered their strongest showing of the season, Hamilton has confidence that his team are in a good place against Red Bull and Ferrari.

Asked by Sky Sports F1 if he could feel the upgrades working, in particular relating to the ride of the W13, Hamilton replied: “The upgrades wasn’t anything to do with ride, it’s just literally downforce.

“And it’s difficult to feel it because we have two massively different tracks, we are coming from a low wing, low speed circuit to all medium and high speed circuits, so didn’t get to feel the car like this last week [in Canada], but it’s much smoother this track which is much better, bit more like Barcelona in that sense.

“But this is the best track there is. It is still hair raising and just epic to drive and we are still fighting the car a little bit.

“Our long-run pace isn’t as good as the other guys, but it’s not miles. So it definitely makes an improvement. I’m sure overnight we can work and improve the car like we want.”

That's a wrap on Friday at Silverstone! P2 for Lewis and P8 for George in a productive FP2 💪 pic.twitter.com/1UleinTFg3

As for the areas where the W13 is still somewhat struggling, Hamilton replied: “I think it’s bouncing still quite a bit, not necessarily in a straight line but through the corners is pretty harsh.

“Not physically harsh, but just like in the car, on the tyres and everything. So we’ve still got work to do, but it feels like a small step forwards.”

Hamilton was reminded that back in Canada, he had said that he could not drive the car like he had used to be able to there.

The eight-time British GP winner maintained that this is the case also at Silverstone due to the characteristics of these 2022 cars, but still he is enjoying the experience.

“That’s just this car, you just can’t drive the tracks the same as you used to with this car with how stiff it is, the right characteristics and this porpoising that we do get which a lot of it is actually from the ride stiffness.