Home » Racing » Lewis Hamilton was at 'risk' of losing 'two places, if not more' in Turkey

Lewis Hamilton was at 'risk' of losing 'two places, if not more' in Turkey 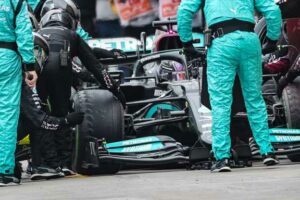 Mercedes’ Andrew Shovlin believes Lewis Hamilton was at risk of losing at least two places in the final laps of the Turkish GP if he didn’t pit.

Hamilton and Mercedes were at odds over his strategy in the closing stages of Sunday’s Turkish Grand Prix.

While the reigning World Champion wanted to stay out on his extremely worn intermediate tyres, initially going against Mercedes’ call to pit, he eventually came in on lap 51 of the 58-lap race.

But, losing two places in the pit stop, he was frustrated with the team’s call and made that abundantly clear.

Shovlin, though, reckons he would have had the same result, at least, if he hadn’t pitted as he would have lost two places in the final two or so laps, maybe even more.

Seeing how quickly Lance Stroll was able to reel in Esteban Ocon, the only driver who didn’t pit, proves this says Shovlin.

“If you look at Esteban, he got overtaken by Lance [Stroll] about five or six laps from the end, and he finished 17 seconds behind him,” the Mercedes trackside engineering director said.

“That’s how quickly you fall off. That’s what is in our mind, it’s not just if we can keep going at this pace.

“Esteban lost a further two seconds in that short run to the finish, and that’s where it goes wrong.

“We’ll go through it and check, but we’re fairly certain we would have lost those two places, if not been at risk from more.”

Hamilton took to social media on Monday to deny reports that he was furious with Mercedes, saying the media was making “a bit too much of” it all.

Shovlin revealed that following a debrief with Hamilton, the Brit understood why Mercedes insisted that he came in for new tyres.

“Lewis is always looking at what’s ahead of him, what’s the most he can get,” Shovlin said.

“He’s deeply invested in this championship and we wouldn’t really expect anything other than frustration at a P5 where at one point we thought we might be able to hang on. But we’ll go through that.

“We’ve had a debrief with him and now he understands the reasons. I think it’s just the kind of frustration from him [because] at times in that race he thought he was going to be on the podium, and that didn’t come true.

“I think there’s a bit of disappointment in that but if we look at how we operated, it was sensible and in a championship battle there’s a point where you’ve got to stop taking risks and cut your loses. Although those decisions are difficult to do, you’ve got to be strong and you’ve got to take them.”

Sunday’s result with Hamilton P5 and Max Verstappen second means the Red Bull driver has retaken the lead in the Drivers’ Championship by six points.