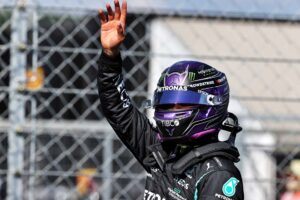 Lewis Hamilton said the booing he received after qualifying in Hungary will only serve to “fuel” him for the race on Sunday.

After taking an eighth pole position around the Hungaroring, the crowd – filled with orange-clad supporters of title rival Max Verstappen – roundly booed the seven-time World Champion as he approached Johnny Herbert to take questions about his 101st P1 starting position.

Herbert did chastise the booing fans, but the Mercedes driver was quick to praise his team for their work over the course of the weekend, before addressing the disapproving crowd and saying he’d “never felt so great” after being booed.

“It was an amazing qualifying lap, that last one,” Hamilton said after the session. “I think it’s been amazing teamwork from everyone this weekend, Valtteri included, to try and push the car forward, developing constantly.

“The guys back at the factory [have] not left any stone unturned, so it’s been amazing to see everyone coming together, rallying up and pushing forwards.

(Pointing to the crowd) “I appreciate the great support I have here. Honestly, I’ve never actually felt so great with the booing.

“If anything, it just fuels me – so I don’t really mind it, it’s alright.”

Mercedes were able to lock out the front row after Valtteri Bottas was able to put himself alongside Hamilton on the grid, with the Red Bull pairing of Verstappen and Sergio Perez lining up behind.

The difference between the teams is that the Mercedes cars were the only ones to get through Q2 on the medium tyres, so the remainder of the Q3 runners will be starting on the less preferable soft compound.

Although the level of wear will be higher, there is a chance the added grip at the start could see the Red Bulls challenge Hamilton on the first lap, but he admitted his shock at seeing the other cars take the soft tyres into Q3.

“I think the soft tyre is worth something like five metres going down into Turn 1, it’s a long way down,” Hamilton said.

“It’s surprising to see the people behind us being everyone on the softs except for us, but we’ll see. It’s great having a [front-row] lockout for our team, it’s the first time in a long time.

“So, a big thank you to everyone back at the factory. I hope the weather’s good for everyone tomorrow, enjoy the sun and stay safe.”