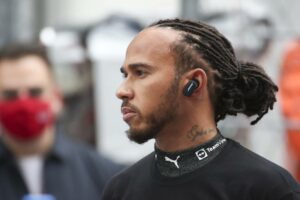 Lewis Hamilton has revealed he “often” thinks about retirement – but then reminds himself how “lucky” he is to be a Formula 1 driver.

The seven-time World Champion is approaching the business end of his 15th season at the highest level of motorsport and has already signed up for two more with Mercedes.

Having just won his 100th race at the Russian Grand Prix, Hamilton could in theory set an astonishing record of 10 world titles while still under the contract he has agreed with his team.

Of course, that does not necessarily guarantee the 36-year-old will definitely race until the end of 2023 should he decide the time has arrived to try something different before then.

In an interview with Sky Italia, Hamilton revealed he does have such thoughts – but the hunger for more success overrides that and keeps him striving to remain at F1’s summit.

Reflecting on the last 99… 🤯 still can’t believe it. THANK YOU 💜 pic.twitter.com/tPAPxZeicZ

Asked if he ever thinks he has won enough, wants to quit, wants to live his life in another way, Hamilton replied: “That thought often happens to me. It’s like a wave.

“It comes and goes. There have been many occasions in the last four or five years when I didn’t know if I still wanted to try, to sacrifice myself with training at the expense of my personal life.

“There are other things I like to do. So many things I would like to try. But on the other hand, I tell myself I’m so lucky to be doing this job.

“In quite a long time, the career in the car becomes only a small part, there is plenty of time to retire.

“It’s a question of finding the balance. I tell myself that if I’m still hungry and train like I did as a kid, which I am doing, and if I still get great results…

“And [I’m] still hungry. If I find myself slower, without the strength to train, and unmotivated, then I’ll know it’s time to stop.”

One particular challenge for Hamilton is that now, with Max Verstappen, and over the next couple of years, his biggest rivals will be drivers well over a decade younger than him – including his next Mercedes team-mate, George Russell.

“There’s some exceptional talent in the new generation,” said Hamilton. “It’s something exciting for the sport.

“It’s fantastic for me, for Valtteri Bottas, for Sebastian Vettel, because I ask myself ‘how I can stand up to the challenge of these guys?’

“I’m much older [than them]. They’re not afraid of anything, they’re in great shape, I love watching them drive.

“I hope I can still deserve my place here, to be able to respond to them as effectively as possible. I’m focused on that.”