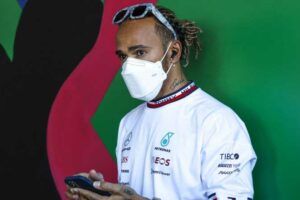 Seven-time Formula 1 World Champion Lewis Hamilton has emerged as one of the reported backers of a bid to buy Chelsea Football Club.

The London club was put up for sale at the beginning of March by Russian billionaire Roman Abramovich as a result of the Russian invasion of Ukraine and the fear of incoming sanctions by the UK government.

Since then, prospective buyers have been proposing bids which are said to be around the £2.5 billion mark in an attempt to become owners of one of the Premier League’s most successful teams.

One of those bids is led by Martin Broughton who was formerly the chairman of Liverpool Football Club and British Airways and it was revealed on Thursday that Mercedes driver Lewis Hamilton was part of the team behind it.

Hamilton, alongside tennis star Serena Williams, was revealed by Sky News to be pledging £10 million each after Broughton had reportedly been in talks with the duo for weeks.

The group behind the bid is British-led, unlike the other two on the shortlist of bidders, and also has Lord Sebastian Coe among its supporters.

If true, it would not be Hamilton’s first foray into investing having backed a range of early-stage companies such as Zapp which is a London-based rapid grocery delivery app. It would however be a surprise considering Hamilton is a fan of Chelsea’s London rivals Arsenal.

Sky News reports that the diversity of the global investors of the bid was among the factors that persuaded Hamilton and Williams to become involved. The news outlet also suggest that if the bid is successful then Hamilton has expressed a desire to play a formal role in Chelsea’s future efforts to promote diversity, equity and inclusion.

The inclusion of the sporting icons was reported as a serious investment decision owing to the duo’s experience at building global sports brands.

Broughton, who is leading the bid, is a Chelsea fan but faces competition from two other bidders. The bank Raine Group, who are overseeing the sale, could reportedly pitch their preferred bidder to the government this week.