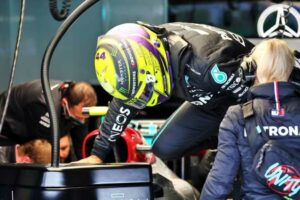 Lewis Hamilton refused to reveal what had been said when asked about a heated-looking conversation with Toto Wolff at Imola.

The seven-time former World Champion had just been eliminated from qualifying for the Emilia Romagna Grand Prix and will start only 13th for the season’s first sprint.

Mercedes have been struggling with the W13 all season and a wet session at Imola proved to be no better – in fact, it was worse as the team failed to get a car into Q3 for the first time since the 2012 Japanese Grand Prix.

Hamilton had only just scraped into Q2 by four thousandths of a second and rain scuppered his chances of progressing any further, meaning no faster times could be set after the resumption of the session following a red-flag stoppage caused by Carlos Sainz’s crash.

The 37-year-old Briton climbed out of the car and stopped to talk to team principal Wolff as he walked past him. The cameras caught a seemingly tense exchange between the duo, with the Austrian talking earnestly to the driver.

About qualifying as a whole, Hamilton, who had exited in Q1 at the Saudi Arabian Grand Prix last month, added: “It wasn’t a great session. Naturally it’s disappointing.

“You come here with optimism and everyone’s working really hard at the factory and then things don’t come together, it’s disappointing.

“I think we under-performed as a team today. There are things we should have done that we didn’t do and anyways…we’ll work as hard as we can to move up in the sprint race.

“It will be a difficult race but hopefully tomorrow will be better weather-wise and who knows, maybe we can work our way forwards.”

Hamilton will start behind his team-mate, George Russell, on the grid for the sprint, with his younger compatriot having qualified 11th. Russell currently sits second in the World Championship standings, nine points ahead of fifth-placed Hamilton.

On pole will be Red Bull’s Max Verstappen, the reigning World Champion, joined on the front row by Ferrari’s Charles Leclerc, who leads the Drivers’ standings by 34 points.

A surprising second row consists of Lando Norris’ McLaren and Kevin Magnussen, who produced the best ever qualifying performance for Haas in fourth.