Home » Racing » Lewis Hamilton: 'Nothing we change on the car makes a difference'

Lewis Hamilton: 'Nothing we change on the car makes a difference' 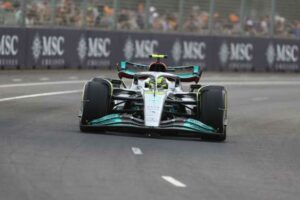 A downbeat Lewis Hamilton admitted that Mercedes are yet to find a set-up to boost the struggling W13 at Albert Park.

The opening practice session of the Australian Grand Prix was somewhat positive for Mercedes, Hamilton setting the seventh-fastest time, but come FP2 he was down to P13 at the chequered flag, the gap to the top growing from 1.2 to 1.5 seconds.

There is little sign then that Mercedes’ problems have eased after moving on from the Middle East, but Hamilton was particularly subdued when he faced the media after the Friday running.

He would admit that the W13 is a “tricky car”, which does not seem to be responding to anything the team try in a bid to make it more competitive.

A tricky #FP2 in cooling conditions, to wrap up Friday at the #AusGP – work to do, so we'll dig into the data tonight 👊 pic.twitter.com/KNnSwsYcPe

Asked if he felt tired or jaded, Hamilton replied: “No I feel good, I feel okay, it was a difficult session.

“It’s just nothing you change on the car makes a difference at the moment, so that’s the difficult thing you know, you’re getting very optimistic and then you make changes and then it doesn’t seem to be wanting to improve.

“We made some changes going into P2 [Practice 2], P1 was better and P2 ended up being a bit harder for us. So I don’t know, just a tricky car.”

Hamilton tried pushing his set-up to the extreme in Jeddah in a bid to tap into more performance, but it would backfire and result in a shock Q1 elimination.

But he does not believe that any of this tinkering at the Australian Grand Prix will leave Mercedes struggling to find their way back, instead, the W13 is what it is and they must just do what they can with it.

“Well I don’t think it’s going to be tricky to find our way back, there’s just not a lot we can do, this is the way it is and so we just have to drive with it,” said the seven-time champ.

Hamilton’s team-mate George Russell finished the second practice session in P11, meaning it was a disappointing Friday for Mercedes as they missed out on the top 10.

Russell too sees much work ahead for the team, though he did notice strange goings on with the soft C5 tyre, which he said was actually improving as he pumped in the laps.

On the subject of the pace which Mercedes need to find, Russell said: “Clearly quite a lot, we’re not in the position where we want to be, there’s quite a few midfield cars ahead of us and obviously quite a long way off the pace from the front.

“So we need to work hard tonight, understand the limitations, the car felt alright, it didn’t feel too bad, but it was a bit strange with my soft tyre, I kept on improving and improving, I know a few drivers did that, but it seemed a little bit more extravagant from our side of things.”

Russell has spoken regularly about the porpoising issue with the W13 and explained that during Friday practice, the bouncing was probably at its worst yet this season.

That being said, at this stage Mercedes still believe that it is the “fastest way around this track”, which was evidenced by the fact that Ferrari were clearly porpoising severely in the high-speed sections, yet topped both sessions.

“We’re definitely porpoising pretty bad into Turn 9, it’s probably the most severe I’ve experienced, but I think it’s something we just have to deal with for the time being,” said Russell.

“We believe that is the fastest way around the track, but maybe it’s not, we need to keep digging into the data and understand, we’ve sort of gone from left, right and centre with the setup and all have resulted in a similar outcome.

“So we need to try and get on top of things and understand what happened.”

Asked if he is still enjoying driving out there, Russell made it clear that he is, especially around a track like Albert Park, the 2022 Australian Grand Prix marking his second visit to this venue.

But of course, the main source of satisfaction comes from featuring towards the top of the timings, which currently has not been the case.

“And when you think you’ve done and good lap and look at the timesheet and you’re down in P11, it’s not where we want to be as a team, it’s all about results.”