Home » Racing » Lewis Hamilton: 'Not true to say I am furious' with Mercedes over pit call

Lewis Hamilton: 'Not true to say I am furious' with Mercedes over pit call 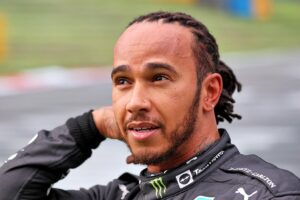 Lewis Hamilton has shut down any suggestions that he is angry with Mercedes after both parties clashed over strategy in Turkey.

It was a damp and cold start to the 2021 Turkish Grand Prix, but even as the circuit dried out slicks still were not an option, as Sebastian Vettel demonstrated with his lap of terror on the medium compound.

Mercedes wanted Hamilton to pit for fresh intermediates, but looking to hold track position and a final podium spot against Sergio Perez, Hamilton wanted to stay out and take a shot at finishing the race without a tyre change.

With title rival Max Verstappen just up the road in P2, it made it even more vital that Hamilton maintained the highest position possible.

But come Lap 51 of 58, eight laps after Hamilton ignored Mercedes’ original call to pit, the Briton did indeed come in for new intermediate tyres without much resistance.

When Hamilton rejoined the track P5 behind Perez and Charles Leclerc he told Mercedes that he should not have pitted.

The team felt that going to the end on that one set of inters was impossible, though Alpine’s Esteban Ocon was able to achieve it on the way to a P10 finish.

Hamilton was left defending P5 from Pierre Gasly in the closing stages, crossing the line in that position as he conceded the Drivers’ Championship lead to Verstappen, who now takes a six-point advantage into the United States Grand Prix.

Tensions were high, but Hamilton has now taken to social media to ease the situation, making it clear that he and Mercedes have moved on already from what happened.

“I’ve seen some of the press this morning which has made a bit too much of the incident in yesterday’s race of when to pit,” Hamilton wrote on Instagram.

“It isn’t true to say I’m furious with my team.

“As a team we work hard to build the best strategy possible but as the race progresses you have to make split decisions, there are so many factors constantly changing.

“Yesterday we took the risk to stay out hoping it would dry, it didn’t. I wanted to risk it and try and go to the end, but it was my call to stay out and it didn’t work.

“In the end we did pit and it was the safest thing to do. We live and we learn. We win and we lose as a team.

“Don’t ever expect me to be all polite and calm on the radio when I’m racing, we are all very passionate and in the heat of the moment that passion can come out, and it does for all drivers.

“My heart and spirit are out there on the track, it’s the fire in me that’s got me this far but my angst is quickly forgotten and we talked it through, already looking ahead to the next race.

“Today’s another day to rise and as a team.”