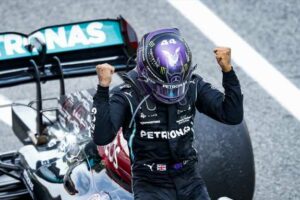 Celebrating a huge milestone in Spain, Toto Wolff says Lewis Hamilton won’t let the naysayers with their “jealousy, envy and negativity” distracted him from the job at hand.

Hamilton made Formula 1 history on Saturday at the Barcelona circuit, becoming the first driver to reach triple figures in pole positions.

The Brit claimed the coveted grid slot for the Spanish Grand Prix by 0.036s over Red Bull’s Max Verstappen.

It was Hamilton’s 100th pole, a feat that, back in 2017 when he broke Michael Schumacher’s record for the most pole positions, no one ever thought was possible.

Hamilton, though, did it.

There are, however, still those who claim it is the car, not the driver.

“There will always be people who will see it this way,” Mercedes motorsport boss Wolff said, as quoted by Italy24news.

“What they say is totally irrelevant. If we listened to all the things that are said, we would be very distracted from our work.

“Andrew Shovlin explained to me that if we put all his laps on pole together, the video would last two hours. This is enough to explain what it has achieved.

“We are talking about an exceptional driver, who has grown as a personality on and off the track. It is clear that this is something that he does much better than others.”

Wolff says he cannot pick a qualifying lap of Hamilton’s that he would rate as the best, after all, they are invariably all fantastic.

“Each time I am asked if this was the best lap he has done, or if it was his best race…” Wolff said, “Lewis is just operating at a level never seen before.

“Even on Saturday the car was probably not perfect, but he beat the others and one hundred poles is an incredible result.”