Lewis Hamilton: Mercedes should make mid-race strategy calls, not me 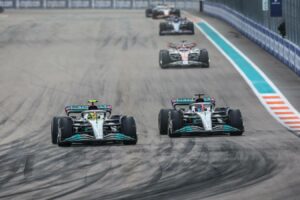 Lewis Hamilton has admitted he could not understand why Mercedes were asking him to make a strategy call at a decisive stage of the Miami Grand Prix.

The seven-time former World Champion eventually finished the race sixth after being passed by his team-mate George Russell, who ended up one place ahead and now has 23 more points than Hamilton this season.

In the end, a contrary strategy for Russell worked well as, from a disappointing 12th on the grid, he ran a long first stint on hard tyres before switching to mediums, whereas Hamilton, like most of the field, went the opposite way after starting sixth.

It meant the Mercedes duo were together on the road in sixth and seventh, Hamilton just ahead, during a Safety Car period following a collision between Pierre Gasly and Lando Norris – and it gave the 37-year-old the option to make a cheap pit-stop to shed his hard tyres for a set of mediums or even softs to tackle the last 10 laps.

Nice one, Team 👏 Maximising the points on offer with P5 and P6 at the #MiamiGP 👊 pic.twitter.com/d08ysQt0dL

A discussion took place between Hamilton and his race engineer Pete Bonnington over the team radio, but the former champion did not feel it should be his responsibility when the team have much information at their disposal than he.

Asked about the situation during his post-race interview with Sky F1, Hamilton explained: “In that scenario I have no clue where everyone is, so when the team say it’s your choice I don’t have the information to make the decision.

“That’s what your job is, make the decision for me – you’ve got all the details, I don’t. That’s what you rely on the guys for but today they gave it to me and I don’t understand it, but anyways…

“Just a bit unfortunate with the Safety Car but at least we got points today, we are finishing, reliability is good. I’m excited to, at some stage, take a step forward, which we haven’t yet.”

Russell and Hamilton finishing fifth and sixth meant Mercedes once more got the maximum haul they could have in the circumstances with the troublesome W13 as Red Bull and Ferrari dominated once more, Max Verstappen winning from Charles Leclerc and Carlos Sainz.

Hamilton also thought his car had been compromised in an opening-lap incident with Fernando Alonso’s Alpine, which overtook the Mercedes before the 103-time race winner regained both positions he had lost at the start.

“The car definitely didn’t feel the same as it did on the laps to the grid,” said Hamilton. “I’m sure they will check it. It was quite a hard hit.

“I was doing the best I could and was a bit unfortunate but we got good points as a team today. We’ll take them and move on.”