Lewis Hamilton: Mercedes had 'our wings clipped' this season by rule changes 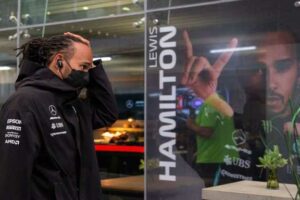 19 points behind Max Verstappen, Lewis Hamilton says the challenge of winning this year’s World title is as “steep as it can be”.

Nearing the end of a season in which the lead in the Drivers’ standings has changed hands six times, it is now Max Verstappen who has the advantage.

The Red Bull driver edged out to a 19-point lead over Hamilton with his ninth win of this season, which he bagged last time out in Mexico.

It was the third race in a row in which the 24-year-old out-scored the seven-time World Champion with Hamilton admitting he faces an uphill challenge pipping Verstappen to the title.

“I would imagine it’s as steep as it can be,” he said when asked how steep the challenge ahead was.

“Their pace was phenomenal in the last race. They’ve had a strong car all year. They’ve had the strongest car actually, you can tell.

“I think we’ve done as well as we think we could. We’ll definitely be pushing this weekend to see if we can squeeze any more out of the car.

“Last time here they were incredibly strong so we’re anticipating again that they’ll be very hard to beat this weekend, but where there’s a will there’s a way.”

Such has been the close battle between the two protagonists that Hamilton has been runner-up to Verstappen in six of his nine wins, and the Dutchman has been P2 to Hamilton in four of the Brit’s five.

My greatest inspiration. It was the way he raced, his passion for life and for the sport. But more than anything it was the way he faced alone a system that wasn’t always kind to him. May Aryton Senna’s legacy live on forever, especially vibrant this weekend pic.twitter.com/SmA4QQpOul

Bouncing from a season in which he won 11 races and wrapped up the title with three races to spare, Hamilton says this season Mercedes had their wings “clipped” by F1’s new regulations.

The Brackley squad, running a low-rake car, believe they were hit harder by F1’s decision to make minor floor changes ahead of the 2021 season.

“This year we’ve had our wings clipped,” Hamilton said, “so it’s definitely been harder from an operational sense to maximise the car.

“What we’ll just try to focus on is getting the car in the right window, which is not easy. It’s not an easy car to set up.

“I think that’s probably similar for everyone.

“It’s just a bit harder to set up this year. It’s really difficult to explain and to go into in terms of details but it’s just harder to optimise.

But, he adds, many of the teams are having similar problems this season.

“To land on the ground with the simulations in the right place is just a little bit harder this year,” he said, “but I think it’s similar for others.

“You saw in Austin for example, the Red Bulls were quite far off and then all of a sudden they switched it round.

“Getting the maximum potential out of the car has been hard this year.”