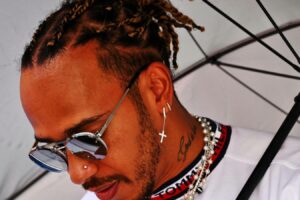 Lewis Hamilton says his Mercedes team cannot write off 2022 and look to 2023 without solving their current problems.

The reigning Constructors’ Champions have struggled in 2022, the regulatory change making a ninth title in succession look highly unlikely with Red Bull and Ferrari now leading the way.

Mercedes had shown signs of a breakthrough at the Spanish Grand Prix, the W13 much closer to the leading pace as George Russell recorded a P3 finish, but the Monaco Grand Prix proved another setback.

All eyes are now on the Azerbaijan Grand Prix to see whether Spain or Monaco was the blip.

But with Mercedes slipping from the title scene, they could be forgiven for putting their focus into making the 2023 car a title challenger from the start.

Hamilton, though, says that is not an option as Mercedes would risk carrying their problems into next season.

“I think we need to find out what’s wrong with this car before we can make another car,” said Hamilton, quoted by Mundo Deportivo. “If we started making another car we could easily get it wrong.

“I think it’s about understanding this fully, which we haven’t done yet, and giving us a path to where to go.”

Hamilton finds himself 34 points behind his new team-mate Russell after seven rounds of the 2022 campaign, a gap partly generated by bad luck on Hamilton’s part but also weekends like Imola and Monaco where Russell was the outright stronger Mercedes driver.

There has, though, been some talk Hamilton is currently focused on helping Mercedes to overcome their problems with the W13 over the outright task of chasing results.

So far, Hamilton has found “a lot of things” in the W13 he does not want carrying over into its successor.

“There are definitely a lot of things I wouldn’t want from this car in next year’s car, so I’ve already included them,” he confirmed.

Much of Mercedes’ early struggles were believed to revolve around the W13’s bouncing habit, a phenomenon associated with Formula 1’s switch to ground-effect aerodynamics, and one that was costing Mercedes performance as they were being forced to raise the ride height.

The dulling of that issue in Spain coincided with Mercedes’ rapid improvement in performance, but at a Monaco Grand Prix that proved a step back Hamilton and Russell were complaining of the ride in the W13, Hamilton at one stage saying it was the bumpiest track he had ever driven.

Team boss Toto Wolff was confident the issue of ‘porpoising’ had not returned in Monaco.

“I don’t think we’ve had bouncing again,” he said.

“We are hitting the ground in a very different way. The car is too stiff, too low.”

At the upcoming round in Baku, Russell is hopeful the six-tenths gap to the leaders seen in Monaco will be slashed to three tenths.

“Around Monaco we were six tenths behind, and into Baku we will probably be three tenths behind the front-runners, we hope, for the best case,” he told Channel 4.