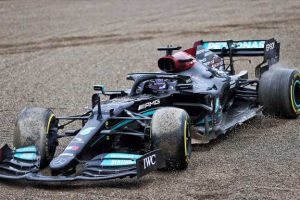 Jan Lammers says Lewis Hamilton often makes mistakes like the one at Imola – the only difference is that he is now being punished for them.

Despite being passed by Max Verstappen at the start and losing some ground to the Dutchman, Hamilton remained in contention for the win in the second race of the season throughout the first half of it.

However, that all changed when he tried to go around the outside when lapping George Russell and ended up sliding into the gravel after venturing onto a damp patch.

While he managed to get back on track, he dropped to ninth position and was only able to fight back and finish P2 due to a Red Flag that bunched the field back up.

Lammers does not believe Hamilton making such an error is a rare occurrence and is pleased he no longer has a dominant enough car to get away with it.

“Hamilton makes mistakes more often than not. His mistakes were never punished because he drove the best car and always got away with it.

“Often Hamilton is there at the moments that matter, but especially at Imola you saw everyone was vulnerable because of the circumstances.”

Watch back the race start!

Verstappen rockets from third on the grid! ?

Even if he had not made the mistake, it is unlikely Hamilton would have won the race as Verstappen seemed to have the upper hand throughout the race after flying off the line.

Lammers thinks the Red Bull’s rapid start from P3 on the grid, that saw him overtake both Hamilton and his own team-mate Sergio Perez, aggressively barging his way past the Mercedes man, was the key to his victory.

“Verstappen got off to a good start, both in reaction and in execution,” he added.

“He had to force his leading position in the first corner combination, but it all looked good.

“The Red Bull driver knew the lead would be so important and during the start, he immediately made the difference.”

While the mistake may have cost him a shot at the win, by fighting his way back up to P2 and setting the fastest lap of the race, Hamilton retained the lead of the Drivers’ Championship, leading Verstappen by just a point.