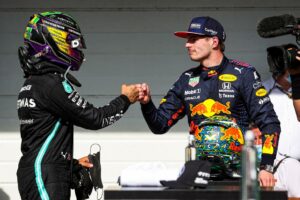 Lewis Hamilton knew the stewards would not take action against Max Verstappen after some controversial defending in Brazil.

With Hamilton closing in on his title rival and looking to snatch the lead of the Sao Paulo Grand Prix, Verstappen was never expected to make it easy, though the Red Bull driver did come extremely close to pushing the boundaries too far.

As Hamilton moved ahead into Turn 4, Verstappen would lunge back up the inside, taking himself and Hamilton deep into the run-off area.

The stewards noted the incident but did not investigate, something which was of little surprise to Hamilton.

“I knew when they said they were going to investigate, I just knew that that’s the decision they would come to, whether it was right or wrong,” he told Sky F1.

“I didn’t let it phase me, I just kept racing.”

Asked if he felt Verstappen was in the wrong, Hamilton said it was probably just a racing incident, but was not giving it much thought since he ultimately made the pass on Verstappen, going on to claim victory from there.

“I’m not going to go into that, I need to go look back at it, but it’s a racing incident at the end of the day probably,” said Hamilton.

“It doesn’t really matter, I got the result needed.”

No driver has ever won from further back than P8 on the starting grid at Interlagos.

It was a truly remarkable showing for Hamilton in Brazil as he bounced back from his disqualification in qualifying to P5 in the sprint, and then the race win after dropping to P10 on the grid via an engine penalty.

Hamilton has now narrowed the deficit to Verstappen in the Drivers’ Championship from 21 points to 14, an achievement which he never expected coming into the race weekend, one which turned into the hardest weekend of his career.

“What a race, the team did an amazing job, Valtteri [Bottas] did a great job today to get as many points as possible [in P3], I was just pushing as hard as I could, but from last on the grid and then another five place penalty was, I think the hardest weekend I’ve had,” said the seven-time World Champion.

“But my dad reminded me of 2004 when I was in Formula 3, in Bahrain and I started last and I finished 10th and then I finished first.

“Coming into this weekend I never thought that we would be able to close the gap like we have today.

“And then these things that just kept going against us, but I think it just really shows, and for everyone just never give up whatever you are facing, you have just got to keep pushing, keep fighting and never, never stop fighting.

“That is really how I approached this weekend, inspiration from all round, but it feels like the first because I don’t feel like I’ve had a win for a long time.”

Reacting to the huge fan backing which he enjoyed throughout the Sao Paulo GP, Hamilton said: “I’m so, so grateful for the incredible support I’ve had this weekend, I’ve not had it since Silverstone when I had my own good group of support.