Home » Racing » Lewis Hamilton: I truly believe we can get a race win this year

Lewis Hamilton: I truly believe we can get a race win this year 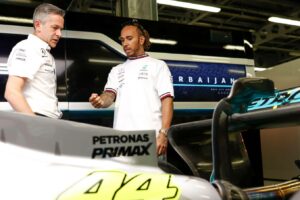 As his win-less streak continues, Lewis Hamilton says he “truly believes” it is only a matter of time before he wins a race in his W13.

And that was not something he thought would be possible earlier this year.

While Mercedes’ W13 is currently the third best car on the grid, it wasn’t always that way with the team admitting they were fortune to get the early season podiums that both drivers achieved.

However, in the last two races, Canada and Britain, Hamilton’s P3s have been the result of performance, not fortune.

It has the Briton confident that his day will come.

“There was a long way back, earlier this year – I definitely wasn’t sure we would ever get a win in this car,” he told the official F1 website.

“Obviously that’s not the way we like to think, but there was a feeling that ‘There’s a long, long way we have to catch everyone’, knowing the progress that everyone makes.

“And then we just had this last race, or the last two races, which were quite strong, and that’s really encouraged us that we’re moving in the right direction that there really is potential in the car and, with a little bit more digging and a little bit more hard work, hopefully we can get a bit closer to having a chance at winning a race.

“So I truly believe we can get a race win this year.”

Finishing third at Silverstone, Hamilton recorded his longest-ever win-less streak in Formula 1, that now up to 11. Previously he had three 10-race runs.

He reckons had it not been for a late Safety Car for Esteban Ocon’s stricken Alpine, he could have finished his home race higher up – potentially even won it.

“Well, definitely in Silverstone there was definitely potential to win the race,” he said. “But with our current performance we’re not on the same – exactly the same – level as the two teams ahead.

“We needed everything to align, so we didn’t need that Safety Car at the end; we needed not to have lost the time in the pit stop… in a perfect world if we didn’t have the crash at the beginning, I would have been third [into Turn 2].

“So, I feel like things all happen for a reason. I think it was Carlos’s weekend. It was written that he’d get his first win there, which I’m really happy for him.

“And coming here, I think we’ve always struggled in Austria so it’s going to be hard to win here, I think, knowing the combination of the corners – but not impossible.

“The weather’s up and down so I’m hoping that we’re pleasantly surprised tomorrow – but I might be wrong. I’ll find out, but I’m staying hopeful and the best thing you do is to arrive hopeful and positive and navigate from there.”