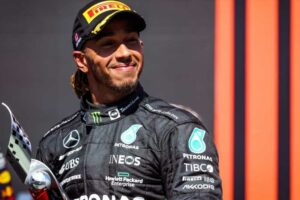 Lewis Hamilton is hoping that in time George Russell can take on the ‘guinea pig’ role at Mercedes, although he feels the team in general should be more “more cautious” about experimenting with the W13.

Mercedes have had a torrid time this season, the reigning Constructors’ Championship struggling to unlock the potential in their all-new W13.

Between that and eradicating porpoising, the team has had to experiment race in and race out with Hamilton unimpressed with the handling of his car after Friday’s practices in Montreal.

Complaining that his overly stiff car was “undrivable” in his final stint in FP2, he had to abandon a hot lap when he almost lost control.

He later described the session as “disaster”, the seven-time World Champion adding that his car was “only getting worse”.

Two days later, though, he was back on the podium having finished third at the Canadian Grand Prix with his team-mate Russell P4.

Enjoying himself out on track for a change, Hamilton would like to see Russell take on more of the experimenting now that he has adjusted to life at Mercedes.

Back in his natural habitat!

A second podium of the season for @LewisHamilton 🙌#CanadianGP #F1 @MercedesAMGF1 pic.twitter.com/C7TPvkl2cu

“Yeah, maybe in the second half of the season George can do the experiments!” Hamilton said.

“We’re just trying to work… we’re just trying to progress as a team. And yeah, I think moving forward, I think we’ll be a little bit more cautious on doing too many experiments as it really does hinder you through the weekend, especially if you only have practice one and two in the dry and don’t get a FP3, for example.

“So yeah, I think there’s lots of learnings from this weekend, and improvements that we can make moving forwards.

“But you know, really great pace today. And it’s so nice to see, it’s not always been the case I’ve had with this car so it’s nice to have a bit of a good battle with her today, her or him, whatever you call a car.

“And I really hope, moving to Silverstone… it’s such an important race for us and for me and so I really hope that… I just want to be in a battle with these guys.

“At the end there when the Safety Car came in and we started again, I was hoping that I could just… the dream was like if I can keep in that battle with them and find a way but they were rapid. But we will get there eventually.”

Hamilton remains sixth in the Drivers’ Championship but is up to 77 points.