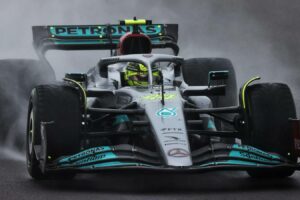 Lewis Hamilton admitted he was “gutted” to have missed out on a front-row start for the British Grand Prix on a soaked Silverstone circuit.

An eight-time winner of his home race, the 37-year-old had been hopeful of even challenging for pole position in his upgraded Mercedes once the rain came.

But instead, the seven-time former World Champion will start fifth on the grid as qualifying ended on a track that was starting to dry out and meant positions were up for grabs right until the chequered flag fell.

Carlos Sainz secured his first ever F1 pole position ahead of Max Verstappen, Charles Leclerc and Sergio Perez on what was ultimately a disappointing day for Mercedes, with George Russell qualifying eighth.

It was intense, but the @MercedesAMGF1 drivers put in a great effort on a tricky drying track 👏

“I’m a little bit gutted really because obviously we have such a great crowd here and I was pushing so hard to get on the front row and fight for pole position,” Hamilton told Sky F1.

“I think we could have been in the top three, honestly. I think I was gunning for second at least. So to end up fifth makes tomorrow tough, but I know this amazing crowd will be with me tomorrow so I’ll try to push forwards.

“I think in the dry we wouldn’t have been able to compete for a top three or anything like that, but I think in the rain we had a chance today.”

Asked to explain why he thought the wet conditions had enhanced his prospects, Hamilton replied: “In the rain you’re not as fast in the high-speed corners, there is less bouncing, and in the dry obviously you’re carrying a lot more speed so you have more bouncing, and the bouncing is making it pretty bad for us.

“Our race pace yesterday was a little bit better than our single-lap [pace], as it seems to be more so the case, and I guess that’s because you’re also going slower through the corners again.”

Mercedes had been right in the mix with Red Bull and Ferrari throughout practice, Hamilton ending FP2 in second, but now Russell will start behind a McLaren (Lando Norris) and an Alpine (Fernando Alonso).

Hamilton added: “We brought some parts to the car but it wasn’t necessarily a big upgrade. It was definitely an improvement for us and we seemed to have closed up a little bit.

“From fifth it will be tough, but I will try to work my way forwards.”