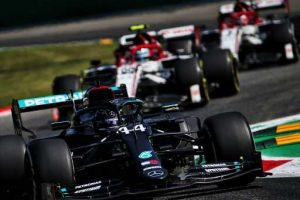 Lewis Hamilton believes traffic will still be a “nightmare” during qualifying for the Italian GP even with a minimum lap time.

The six-time World Champion, like most people will not have forgotten the farcical scenes of Q3 at Monza last year when nine of the ten drivers failed to make the line to start their final flying laps after crawling around the track in an effort to drop back into the pack and pick up a tow.

Hamilton was able to top FP2 as he prepares for the 2020 Italian GP, but traffic proved to be a huge problem again during both practice sessions.

The FIA have announced that they will determine a maximum time for an out-lap to try and relieve some of these issues, and though Hamilton admits that will help, he still thinks qualifying will be a “nightmare” regardless.

“It was difficult in the past and obviously we didn’t even get to do the last lap last year, so I think it’s going to be interesting,” he said after FP2, as quoted by Crash.net.

“I heard they might put in place a minimum time that we have to do an out lap so maybe that will help.

“But still I think it’ll be a nightmare at the last corner with everyone trying to get a gap – it’s definitely going to be hard work.”

Lewis leads the way in #FP2 at Monza! ?Productive day of practice = ✅ pic.twitter.com/pSHT9ynxzr

Despite topping FP2, Hamilton said he hadn’t been paying attention to the times of those around him.

“I’ve not really been looking at the times, I’ve just really been working on set-up, and so I don’t really know how close I am to him [Bottas] or he is to me,” he told Sky F1.

“Just trying to make sure I get the right balance for a single lap, as it’s really hard to overtake here, and then to figure out how to get the balance right for the race.

“It felt like we made some improvement from P1 to P2, in P1 it didn’t feel great.

“But then because it’s all low downforce here obviously, a lot of sliding around, then FP2 some steps in the right direction. It’s going to be close between a bunch of people I think.”