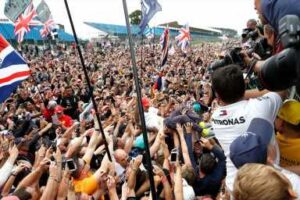 The British Government on Thursday announced that it was giving the go-ahead for the British Grand Prix on July 18 at Silverstone to take place in front of a capacity crowd of 140,000 spectators.

Lewis Hamilton is not so sure that’s a great idea.

“I’m kind of split,” Hamilton said during media video conference on Thursday in Austria. “I can’t tell you how excited I am to see the people and especially the British crowd because it is the best crowd of the whole year. Last year, we didn’t have them, so to be able to see them and feel the energy that they bring to a weekend.

“On the second, obviously because I watch the news, so I hear about the (COVID-19) cases going up massively in the U.K. So, on that side I worry for people, naturally.”

This weekend’s Styrian Grand Prix at the Red Bull Ring will welcome 15,000 fans to the race. Next weekend’s race in Austria, that number is being increased to 100,000 as Europe loosens up its COVID-19 restrictions on events.

“It definitely changes the atmosphere on the weekend quite a bit,” Williams driver Nicholas Latifi said. “Last year, there was a select few races that there were some fans, obviously not in full capacity. Every time there was, it’s just the dynamic it brings to the weekend. It’s for sure much more enjoyable the fans add such a buzz to the event. That’s probably one of the great aspects about being a driver is really connecting with the energy and feel that.

“Now, Silverstone should be the first one with full capacity crowds. Like Lewis said, it is always one of the, if not the, most attended Grands Prix across the calendar so it will definitely be something special to see. But at the same time, I base myself in London so I’m aware of the cases as well. They are on the up, so I guess an event like this will be a good test from the government to see at big public events to see if the vaccinations and stuff are working properly. Nonetheless, I’m looking forward to a great atmosphere there.”

Hamilton isn’t so sure that at Formula 1 race should be turned into some sort of petri dish to see if vaccinations are working in the fight against the pandemic.

“I don’t want to turn into a negative,” Hamilton said. “I am excited to see so many people. The selfish part of me, I want to see all the people there. But I turn on the news this morning and I’ve been watching it these past days. I know that the U.K. rates have increased since people are loosening up a little bit, and everyone is not vaccinated. I do worry about people, but I know that I read the vaccination is good. There’s less people being in hospital. But I don’t know. If feels premature to me. I hope we learn something from it. I hope everyone just stays safe.

“I encourage everyone to continue to wash their hands, continue to wear your masks when you’re in those big crowds.”