Home » Racing » Latifi: Williams was 'best it's ever felt' at Sochi race

Latifi: Williams was 'best it's ever felt' at Sochi race 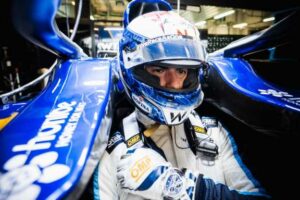 Although he left Russia without a point, Nicholas Latifi says his Williams “felt the best it’s ever felt” in his two years with the team.

The Canadian started Sunday’s grand prix P18 on the grid after incurring an engine penalty for taking his fourth PU of the campaign.

With that penalty in mind, Latifi didn’t take part in Q2 on Saturday and afterwards declared that “Q3 was definitely on the cards when I’d seen what I did in Q1, no question about that”.

His good feeling with his FW43B continued in the grand prix, but given the struggles that several drivers had in overtaking on the day, he found himself stuck behind Nikita Mazepin.

Latifi would later retire from the race with a hydraulic issue.

“The race came on undone behind Mazepin, just not being able to get by him,” he told Motorsport.com.

“It was a shame because on the prime stint the car felt the best it’s ever felt in the two years I’ve been with the team.

“It’s quite surprising, but it makes it more frustrating that this was a race where we had to start where we did. I was flying at the end, and it’s just unfortunate we weren’t in the mix.”

A tough end to an otherwise strong weekend for @NicholasLatifi 😫

His team-mate George Russell was very much in the mix, both in qualifying and the race.

The Brit put his car up onto third place on the grid having gone with the slicks in Q3 while everyone else was still running the intermediate tyres. Russell finished the grand prix in 10th place.

“Obviously seeing what he did shows the potential that could have been,” said Latifi. “But also what I did in Q1. I was for whatever reason flying in Q1.

“I set a lap time in the middle of the session when the track was still wet that went P6 at the time, and that still good enough to stay P10 when when everyone else was improving at the end of the dry track.

“I felt quick, and it would have been nice to see what we could have done. If I did my job Q3 was easily on the cards, and then we saw how Q3 ended up, and obviously when we’re in that position you have nothing to lose so you can take the risks.

“That’s how it goes sometimes. It’s frustrating for sure, but that’s racing, and I’m sure we’ll get more opportunities, because the pace is consistently there now. So if it’s consistently there, it’ll be there to take advantage of something one time or another.”

He added: “The main thing is the consistency, because even last year there were periods or flashes where the pace could be there, it just maybe it wasn’t always in qualifying, or was in the race.

“It’s coming together more consistently which definitely brings confidence, and then just for different reasons on each of the past races there have been things out of my control that have put me back.

“But it’s been nice to be in the mix in those races as well, and like I said if I keep doing my job properly we keep working well with the team then there will be more opportunities like that, because it’s coming now.”