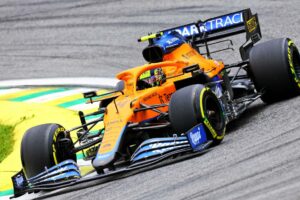 Lando Norris has called for a shake-up of Formula 1’s qualifying system on sprint weekends.

The McLaren driver is keen on the idea of the sprint being established as a standalone race of its own.

At present, the sprint is more of a means to an end, with the weekend following a progressive path from Friday through to Sunday.

Friday’s traditional one-hour qualifying session forms the grid for Saturday’s sprint, the result of which in turn sets the starting order for the grand prix on Sunday.

Three such weekends have taken place in 2021 at Silverstone, Monza and Interlagos, and they are set to be increased to six next season.

They are likely to take on a revised format anyway, with the potential of more points for the sprint, but Norris has put forward his own idea for how they could be further spiced up.

“The thing I would love to maybe add is to change it so you have qualifying on Friday for the race on Sunday,” said Norris, quoted by Motorsport.com.

“Then you have a one-shot qualifying on Saturday morning for the sprint race on Saturday. So a one-lap qualifying like they used to do.

“I think that could be exciting, instead of the FP2 we do now. Therefore you set up Saturday to be a little bit separate, I guess. So the sprint wouldn’t mean anything for the Sunday race.”

One-shot qualifying was tried when Formula 1 was experimenting with different formats in the mid-2000s, but was eventually shelved in favour of the current system.

Sky F1 presenter Ted Kravitz said during his Saturday Notebook at Interlagos he had heard news will be revealed in the coming weeks that there could even be a separate championship for sprint events.

“Two crucial things are going to change next year with the sprints,” said Kravitz. “First, it looks like it will be an entire six-race sprint championship with its own points – so the winner will get 10 and there will be points down to 10th place and the results of the sprint will not set the grid for the grand prix.

“I must stress it just looks like at the moment that the current mood, speaking to Ross Brawn and Stefano Domenicali, is that the purists will win out, and it looks like qualifying on a Friday will set the grid for the grand prix and we’ll have our own little sprint championship that will be a bit more valuable in terms of points.”