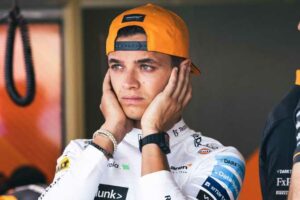 Lando Norris was pleased with his effort in the Hungarian Grand Prix, but the massive gap to the top three teams is a cause for concern.

Norris had an excellent qualifying session in Budapest, putting his McLaren fourth on the grid and only four tenths behind George Russell’s pole time.

But his race was a tougher proposition altogether, having been relatively easily swallowed up by Lewis Hamilton and Max Verstappen, as well as Sergio Perez shortly afterwards.

Norris eventually brought his McLaren home seventh as ‘best of the rest’ behind the Red Bull, Ferrari and Mercedes drivers, but he was a whopping 62 seconds behind Charles Leclerc one place ahead.

But Norris achieved his main aim from the race, as he crossed the line ahead of the Alpine duo of Fernando Alonso and Esteban Ocon, with whom they are locked in a tight battle over P4 in the Constructors’ Championship.

Lando Norris suffers the double whammy of losing two places in as many corners there. #HungarianGP 🇭🇺 #F1 pic.twitter.com/zaLkeWwe1Z

“Yeah, I mean, 22 seconds to Alonso and Ocon so I’m happy, so our goal today was to do that I guess.” Norris said to Sky Sports F1 after the race.

“When you’re in the mix and you start P4 you just hope for a little bit more at times, but I thought I felt like I did a good job.

“Difficult first stint on the soft tyres, just completely destroyed them after like five laps, so I was a little bit worried.

“But then the second stint on the medium was very strong, and also the final stint on the hard, so I think a good day, just 62 seconds behind the next position.

“It’s a big margin, but it is what it is, and we have to keep working and close it up.”

Norris’ McLaren team-mate Daniel Ricciardo had a tougher time of things overall, finishing P15 after taking a time penalty for contact with Lance Stroll at Turn 2.

After scoring the same amount of points as Alpine on Sunday, McLaren remain four points behind their Constructors’ Championship rival heading into Formula 1’s summer break.