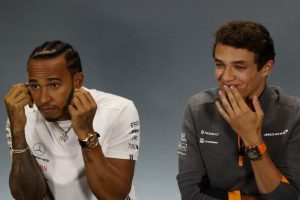 After making his Formula 1 debut in 2019 with McLaren, Norris’ career scaled to new heights in the 2020 season opener in Austria as he finished on the podium for the first time.

Norris, on the final lap, set the fast lap of the race to get to within five seconds of Hamilton, who had a time penalty for causing a collision with Alex Albon.

Hamilton dropped to P4 as a result with Norris joining Valtteri Bottas and Charles Leclerc for the podium celebrations.

And Carlin feels that once Hamilton steps away from Formula 1, Norris can become Britian’s leading talent.

“Lando is the obvious heir to Lewis’ crown as the top British driver,” Carlin told The Sun.

“When Lewis achieves everything he needs to achieve and steps down, Lando will be at the helm.

“He needs the correct package but McLaren have made incredible steps over the last few months and who’s to say that they cannot be a force in 12 months’ time?

“He is doing everything right and the results are coming and I am very proud of him.”

Carlin is also not expecting podiums, and possibly race wins in the future, changing Norris for the worse.

“Will he change from a lifestyle point of view? Absolutely not. He is not that sort of guy,” he added.

“A great example is Sebastian Vettel because he was racing with us in 2006 and 2007.

“I saw him at Hockenheim two years ago when his younger brother was doing an Audi support race and Seb was doing his brother’s pit board.

“I went over and asked him how he was doing and I said, ‘hey Seb, mind if I tell you something?’ He said ‘what?’

“I said ‘you have never changed’. Now, it has been years since he drove for me and is a four time world champion and has all the money in the world.

“He just looked at me and replied ‘why would I need to?’ and I see Lando being exactly the same.

“Lando is the nicest person you could ever meet. I am chuffed to bits for him.

“He is not flash or big headed. He basically always delivers. It is as simple as that.”