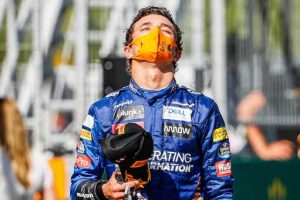 Lando Norris has revealed he messaged Lewis Hamilton directly this week, besides apologising publicly, following his comments about the World Champion.

The McLaren driver sent a contrite tweet this week in which he expressed regret for “stupid and careless remarks” he had made about rivals during and after the Portuguese Grand Prix.

Norris had been involved in a collision with Lance Stroll, for which the Racing Point driver was penalised, and said the Canadian “doesn’t seem to learn from anything he does – it happens a lot with him, so I just need to make sure I stay away next time” having also launched an expletive-laden rant over the team radio.

The 20-year-old had also played down Hamilton’s record-breaking accomplishment of 92 F1 race wins by saying the Mercedes man “has to beat one or two other drivers, that’s it” and that “it doesn’t mean anything to me, really – he’s in a car which should win every race, basically”.

On media day for the Emilia Romagna Grand Prix at Imola, Norris confirmed he had taken the decision to reach out directly to Hamilton over the matter – and said his apology had been sparked by his words about his fellow Briton more than those regarding Stroll.

I owe an apology. I’ve been stupid and careless with some things I’ve said lately in media and interviews, and haven’t shown the respect I should have to certain people. I’m not that kind of person, so know I should apologise to them but also everyone reading/listening. Sorry

“It was more the comments about Lewis and him reaching his 92 wins,” said Norris during his pre-race press conference. “Which I have a lot of respect for and I just didn’t choose the right words to put it into context.

“I also apologised to Lewis himself, I messaged him. I don’t know if he knew about it at the time. I never mean to say something like that in a bad way or put any bad light on him at all. I respect everything he’s done to achieve what he’s done. It’s incredible no matter what.

“It’s just the way I put it was not the way I wanted to put it across. I said what I said, I apologised and I’ve just got to move on.”

Norris also insisted the decision to apologise was his alone, and he had not been compelled to do it by anyone else.

“I woke up in the morning, looked on social media and there was a lot more bad comments than good about the things I said. I never mean any of it to be put in that way or taken out of context in a bad way, especially against Lewis.

“I saw how it was going down and I felt bad because it’s not the person I am in any way, to put shame on anyone or not have the respect for such a driver. So I made the decision in the morning to put out the tweet and just issue my apology and message Lewis at the same time to set things straight.”

Before speaking to the media after the race in Portugal, Norris also apologised on his radio for swearing at Stroll following their collision.

“My first apology was more for the language I used more than anything,” he explained. “Not everything I said I apologised for but just the specific wording of what I said.”