Home » Racing » Lando Norris says kick out abusive fans 'for a while', not life

Lando Norris says kick out abusive fans 'for a while', not life 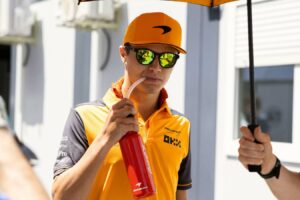 Lando Norris believes that fans dishing out abuse do deserve a ban, but not necessarily one that is valid for a lifetime.

Along with Formula 1’s growth in popularity has seemingly come an increase in incidents of hostile fan behaviour, a topic which the drivers discussed at the Austrian Grand Prix.

Max Verstappen had been booed by members of the crowd at Silverstone on multiple occasions, while in Austria, a section of spectators cheered when Lewis Hamilton suffered a heavy crash during qualifying.

The situation later grew more concerning after reports of vile behaviour from some spectators began to emerge, causing Formula 1 to release a statement.

“We have been made aware of reports that some fans have been subject to completely unacceptable comments by others at the Austrian Grand Prix,” read the statement.

“We take these matters very seriously, have raised them with the promoter and event security and will be speaking to those who have reported these incidents.

“This kind of behaviour is unacceptable and will not be tolerated.”

Four-time World Champion Sebastian Vettel suggested a lifetime ban for abusive fans, a punishment which Norris felt would be too harsh, but a one-year ban would be appropriate to his mind.

“Kick them out, [but] I wouldn’t say a life ban,” said Norris, quoted by GPFans.

“I don’t want to say it like that, because a fan is a fan. If they want to be here it is because they like racing and they enjoy the atmosphere. The thing is that there are thousands of people.

“What can be done? I don’t know. I think the first thing that can be done is that if you get caught doing it, you get a year’s ban from coming to the races or something like that.

“Of course, we don’t want it, it’s not acceptable, especially within Formula 1 where we want to create a great show and want to inspire people and so on.

“You never want that side of it to be happening, especially when fans are the main reason the whole sport goes along and happens every weekend.

“If someone says something bad, just kick them out for a while.”

To the suggestion that Formula 1 may be dealing with a culture problem, Norris replied: “I couldn’t tell you. I don’t think so.”

Instead he feels the problem is a lack of consequences, pointing out that Formula 1 is now attracting a younger audience.

It was not long ago that Norris discussed the death threats which he receives on social media.

“The population of, or the age of viewers, is also younger and younger so I just think a lot of people don’t care in the world, which is the problem,” Norris continued.