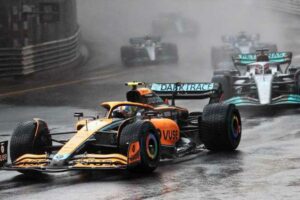 Lando Norris described the Monaco Grand Prix as one of the most “nerve-wracking” and “scary” things he has done in his life.

The McLaren driver recorded his best result since the Emilia Romagna Grand Prix when he finished P6 in Monaco but despite the upturn in results, Norris was quick to highlight how difficult driving was.

Following an hour’s delay due to the weather conditions, the drivers eventually took to the track behind the Safety Car but it was not until well into the race they were able to switch to dry tyres.

Carlos Sainz and Zhou Guanyu were pictured saving their cars after temporarily losing control, whereas Mick Schumacher crashed out when he spun into the wall.

Norris, who has only raced at Monaco twice before, described Sunday’s grand prix as one of the scariest things he has done in his life.

“I can’t describe how tough driving a Formula 1 car is in really wet conditions around this circuit,” he told Sky Sports F1. “It’s one of the most nerve-wracking, scary things I’ve ever done in my life.

“It’s so tough. You know you want to push because you know other people can make mistakes but when you think like that, that’s also when you start to make a mistake.”

Norris picked up the fastest lap bonus point but was keen to highlight that despite being the quickest non-Red Bull, Ferrari or Mercedes driver, there were still areas his McLaren team could improve on.

P6, fastest lap, and he's not even back at 100%. Epic drive all weekend @LandoNorris 👏 pic.twitter.com/ZyFDLG8cMg

“[It was] tough but still a good race from start to finish, managing the tyres,” the 22-year-old said. “Some things we maybe can improve on and do better for next time because I don’t feel like it was a flawless race from our side and strategy and things like that.

“But I’m still happy with sixth. Some good points, fastest lap. So even if I had finished P5, I only would have gained one more point, which is something, but not the end of the world.”

With the P6 finish and extra point, Norris moved within two points of sixth-placed Lewis Hamilton in the Drivers’ standings. McLaren remain fourth in the Constructors’ Championship, 75 points behind Mercedes and 18 ahead of Alfa Romeo.

Norris’ team-mate Daniel Ricciardo, meanwhile, was unable to add to the points haul with a 13th-place finish in Monte Carlo.