Lando Norris: Pierre Gasly 'needs to do a better job next time' 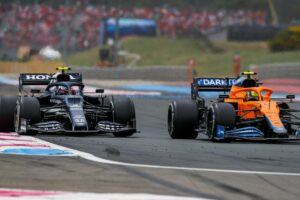 Despite sharing some banter about it with his rival, Lando Norris thinks Pierre Gasly “needs to do a better job” after their close call in the French Grand Prix.

Norris made his strategy work superbly at Paul Ricard, running a long first stint on medium tyres before surging up the order on fresher rubber in the latter stages – ending up fifth, the top finisher outside of the Mercedes and Red Bull cars once more.

But his progress could have been halted in a battle with Gasly, the duo almost colliding at Turn 1 as the AlphaTauri driver defended his position and ran off track before eventually succumbing to the charging McLaren.

Gasly was described as an “idiot” over the team radio by Norris, who then also passed his team-mate Daniel Ricciardo to take his points tally in an excellent personal season to 76 – only eight behind third-placed Sergio Perez in the standings and 17 ahead of Valtteri Bottas.

After the race, Norris and Gasly enjoyed a light-hearted exchange with Karun Chandhok and Nico Rosberg as they reviewed the incident on the Sky Pad – but in his other media commitments, the Briton was more critical of his opponent’s actions.

“Maybe he [Gasly] was a bit over-aggressive and he needs to do a better job next time,” Norris told reporters.

“But a lot of what he did was fine. It was just that final bit he was trying too hard. It’s racing and I think as long as he doesn’t do it again, I’m happy.

“We are racing and things happen. The fact he also ended up completely off the track is the bad part about it. He forced me off but he even went off.”

Happy days. P5 and a perfect strategy. You can't ask for much more than that. pic.twitter.com/xNRyBqHHKy

Get the Lando look: The best Norris merch for 2021

From his side, Gasly said: “I saw him and he was coming very fast. It was very close. I’m sure you guys enjoyed it! They [McLaren] were really fast. I tried everything I could but it wasn’t enough.”

About being called an idiot, he added: “I’m the first one to say these kind of things as well in the heat of the moment. Probably if he had done the same thing to me I would have called him the same way. It was hard racing.”

Both Norris and Ricciardo, who finished sixth, improved markedly on their grid positions to move their McLaren team 16 points ahead of Ferrari in the Constructors’ World Championship on a poor day for the Scuderia.

“We over-achieved,” said Norris. “I wasn’t really expecting to finish fifth and sixth for the team and for me fifth. Especially lap one was pretty bad for me, and the start really. I had a bad shift to second or third gear and lost quite a few positions.

“Not perfect but we did a good job with the strategy. We looked after the tyres nicely and it worked out for us. I’m a bit surprised but happy. We’ll take it. Good points for us, so a good weekend.”