Lando Norris: 'One week's not enough' time between races 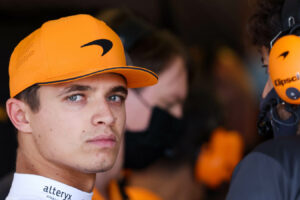 A record 23-race calendar was put in place for the year ahead, with the omitted Russian Grand Prix in September set to be replaced with another race to make up the shortfall.

The expanding calendar has become a hot topic in Formula 1, with the ever-increasing demands placed upon the teams and drivers coming under scrutiny for the amount of time team members spend away from home through the year – on top of the long shifts and significant travel time they already experience.

The Concorde Agreement between the sport and the teams accounts for up to 25 races per season, but the schedule is already packed. Of the 22 race weekends confirmed on the calendar this season, 19 of them feature as part of double or triple-headers.

This in turn reduces the amount of rest time available for everyone involved in the sport, and the McLaren driver would like to see a drop in the number of races to allow him more time to recover.

“18 to 20,” Norris said in a YouTube question and answer video when asked about his ideal number of races.

“Sometimes it was actually nice to have two weekends off in a row, because now we only have a maximum of one weekend off and that one weekend off, you have a bit of time to chill from the previous race, but by the time you’ve chilled you are already preparing for the next race.

“Whereas when you had two weekends off, you could chill, then you could chill even more! And you are fully chilled, you take your mind off racing for a bit and then you start the build-up.

“One week’s not enough.”

Norris’ team boss Zak Brown proposed the solution of rotating certain races on the calendar year to year by splitting them into ‘A’ and ‘B’ markets, depending on their status in Formula 1.

This in turn would broaden the reach of the sport as they intend but without increasing the demands on the teams further, adding that his ideal would be 21 or 22 race weekends per year at most.

“We want to respect the history of the sport but there’s not many sports that haven’t changed in recent times to adapt to a changing world. I think a Saturday night race in Vegas is the obvious thing to do,” the McLaren CEO told Reuters after the Las Vegas Grand Prix was announced.