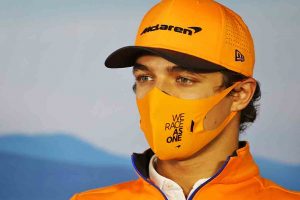 Lando Norris has apologised for comments he made at the weekend about other drivers, including playing down Lewis Hamilton’s F1 race wins record.

The McLaren man claimed Hamilton “has to beat one or two other drivers, that’s it” and that the World Champion’s new record of 92 Formula 1 race victories “doesn’t mean anything to me, really – he’s in a car which should win every race, basically”.

There were also remarks from Norris about Lance Stroll after the duo had collided during the Portuguese Grand Prix in the Canadian’s first race back since recovering from COVID-19.

Stroll was given a five-second penalty for the incident at turn one of the Algarve International Circuit, two days after he had also clashed with Max Verstappen’s Red Bull at the same corner.

Norris said Stroll “doesn’t seem to learn from anything he does – it happens a lot with him, so I just need to make sure I stay away next time”.

But now the 20-year-old Briton has clearly seen the error of his ways for being so outspoken and has offered an apology via social media.

“I owe an apology,” said Norris, who finished 13th in the Portuguese Grand Prix following the incident with Stroll which damaged his car.

“I’ve been stupid and careless with some things I’ve said lately in media and interviews and haven’t shown the respect I should have to certain people.

“I’m not that kind of person, so know I should apologise to them but also everyone reading/listening. Sorry.”

I owe an apology. I’ve been stupid and careless with some things I’ve said lately in media and interviews, and haven’t shown the respect I should have to certain people. I’m not that kind of person, so know I should apologise to them but also everyone reading/listening. Sorry

Norris has stepped up this year on his first year of F1, enjoying his first podium finish in the season-opening Austrian Grand Prix and recording three more results that were better than anything he recorded in his 2019 debut campaign.

However, the last three races have not been as good for him, with the P13 in Portugal following a P15 in Russia, where he was hampered by his team-mate Carlos Sainz’s crash on the opening lap, and a DNF due to an engine failure at the Nurburgring.

Next year, Norris will have Daniel Ricciardo as his McLaren team-mate, the Australian joining from Renault as Sainz moves on to Ferrari to take over from Sebastian Vettel.