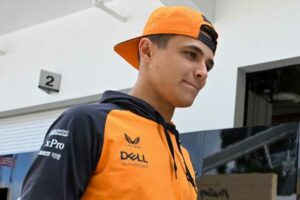 Lando Norris said his collision with Pierre Gasly was a “silly accident” as the McLaren driver was forced to retire.

In an another weekend to forget for McLaren, Norris’ race came to an early end on the 41st lap when he was spun round after a collision with Gasly. The rear right tyre of the McLaren ripped off the car and rolled down the track as Norris spun before coming to a stop.

The crash came as a result of Gasly going wide on the previous corners and then seemingly being unaware that Norris was about to overtake him on the left-hand side.

Speaking after the race, Norris described the incident as a “silly accident.”

“It’s tough. I’ve looked at it a few times now but it’s tricky,” Norris told Sky Sports F1. “I don’t know if he had damage or something.

“I left space obviously, I knew he was on my right but the track kind of kinks to the right. I’m going with the flow of the circuit and it didn’t look like he was. He was looking in his right mirror.

“I thought I did what I would normally do but just ended up being a silly accident.

“I’m quite annoyed I guess, we could have scored maybe one or two points today but it happens. We’re lucky we didn’t lose out on too much.”

A dramatic end to Norris's race after contact with Gasly 😮#MiamiGP #F1 pic.twitter.com/IM4tJoWjO1

However, Gasly explained that an earlier incident with Fernando Alonso had resulted in damage to his AlphaTauri car.

“Fernando crashed into us in turn 1 and basically broke the rear right of the car,” Gasly said. “So we tried to go for one more lap to see if we could continue and make it to the end of the race but the car was too damaged to stay on track as we saw through the first sector.

“On the way back to the pits, we had contact with Norris and I was trying to turn right and let the guys pass and then Lando came and unfortunately we had contact.

“I must say I’m extremely disappointed because it was a great start, it was a great afternoon. We passed Lewis [Hamilton] at the start, we were looking for around P8 at the chequered flag and it would have been a nice battle with Fernando but I don’t really know what’s happened.

“I haven’t seen the footage but he hit us quite hard at the back and broke the car. A lot positives but obviously extremely disappointing not to finish the race.”