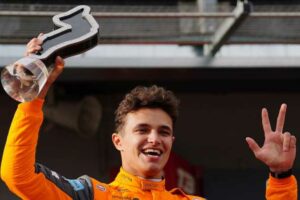 In the wake of their podium finishes, Lando Norris and Max Verstappen shared a joke about other drivers comparing their performances to their car.

While it was pretty much smooth sailing throughout the weekend for Verstappen – who completed the rare grand slam of sprint winner, race winner, pole and fastest lap – Norris saw his fortunes change late on when Charles Leclerc spun out.

Like Verstappen, the McLaren driver had been in a race of his own until the Championship leader’s late spin allowed Norris an unlikely podium.

It represented quite the change of fortune for McLaren who after the opening two races looked like they would be lucky to get in the points positions let alone a podium.

However, despite this improvement, Norris was still unwilling to say the McLaren was now the third-fastest car on the grid. Instead he joked that if he wanted to be like George Russell, he should say he had the seventh fastest car.

“Hmmm… I mean, if I want to be like George, I’ll say I had like the seventh fastest car!” Norris quipped when asked if he had the third fastest car in the post-race press conference.

Verstappen, who was sat alongside Norris as well as his team-mate Sergio Perez, then chipped in and said Norris should say it was “all the driver”.

“It is!” Norris replied.

“You had the worst car!” continued Verstappen.

“Yeah, we’re ninth or tenth – but my driving this weekend has been pretty amazing!” said Norris.

Verstappen then said “I agree” and finished up the joke by saying “this will be a nice headline.”

The McLaren driver then switched tones and said it was “too difficult to say” if his team’s car could now be described as the third fastest.

“It changes every weekend,” Norris said. “The Mercedes wasn’t so bad this weekend. I think we were a little quicker than them, probably throughout.

“The Alfa Romeo was maybe quicker. He [Valtteri Bottas] was off at the start, I think: quicker yesterday, maybe quicker today – just couldn’t get past George.

“I think we just executed a great race from our side. The car was good, and I had good confidence and that’s all I needed.”