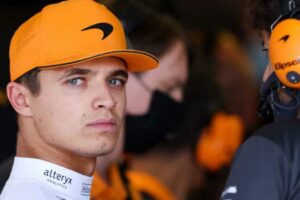 Conceding that McLaren aren’t in a position to fight for a top-three finish at Imola, Lando Norris has urged his team to “keep improving, keep learning”.

Although McLaren had a good opening day of pre-season testing, problems began to emerged most notably with the MCL36’s brake cooling.

Resolving that while also having to deal with Daniel Ricciardo missing the entire second test with Covid meant the team started the 2022 championship on the back foot. And it showed in the results.

The team failed to score a single point in Bahrain while one race later, Saudi Arabia, Norris made it into the top-ten in seventh place.

Another step forward at the next race, Australia, had both drivers scoring points with Norris P7 and his team-mate Daniel Ricciardo sixth.

But while the Briton is hoping for another improvement at round four, the Emilia Romagna Grand Prix, he concedes a repeat of last year’s podium finish is unlikely.

“We’re not back fighting for podiums just yet,” he said, “but hopefully we can keep moving forward and get the most out of this weekend.

“Australia was a more positive weekend for us, but we know we still have a lot of work to do to get where we want to be.

“Let’s keep improving, keep learning more about the car and be ready to take advantage of any opportunities that come up.”

Last season Norris was P3 at the Imola circuit, a race in which Ricciardo also scored in sixth place.

It is a circuit that Norris enjoys racing at, the driver looking forward to this year’s added excitement of a sprint race.

Qualifying will take place on Friday evening with a sprint race on Saturday evening determining the grid for Sunday’s Emilia Romagna GP.

“The circuit is fast, with some iconic features which should be interesting to tackle in the new cars.

“The Sprint always adds an extra bit of excitement for the fans so I’m looking forward to seeing how the weekend plays out.”

This year the drivers will score more points than in 2021 for the Sprint race with the top eight all scoring points. The winner will be bag, second will score seven and so on down to eighth place.

Those points could make a big difference in the Constructors’ Championship with McLaren on 24 points in fourth place, just two ahead of Alpine.