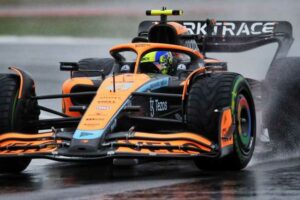 Lando Norris plans on making life pretty easy for George Russell at Silverstone so that he can focus on battling with Fernando Alonso.

A soggy British GP qualifying led to some surprises in the final order, one of those being Russell who will start from P8, two positions behind Norris in the McLaren.

It is the Alpine of Alonso separating the pair, and Norris expects his battle in the race to be with the Spaniard, not Russell, who he does not want to spend much time defending against.

Looking ahead to his race in conversation with Sky Sports F1, Norris said: “We’ve been in a decent place all weekend, which is a little bit surprising because I think we’re the only team to not bring really any upgrades and a lot of people have brought big things. So to be in that position is very good for us.

“To try and hang on is going to be the question for tomorrow. I’m expecting George to be coming past me quite quickly.

“But our race is with Fernando, Zhou [Guanyu], maybe not so much the Williams. Who will I fight? I think it will be a good one with Fernando. I think that’s going to be my main target tomorrow is probably Fernando.

“George, I’ll probably just wave him through, make his life a little bit easier, but the rest will be a good fight.”

That's the chequered flag on qualifying at the #BritishGP. Great pace from Lando in Q3!

Nonetheless, Norris was very satisfied with P6 on the grid and to have out-qualified one of the Mercedes, even if some mistakes on his final run did creep in.

“Very satisfied, to be ahead of one Mercedes as well, a car which is a lot quicker than us, and to not be far off Hamilton,” said Norris.

“I think he improved on the final lap and I made a couple of mistakes, so not the best of jobs by me, but good enough and I’m very happy with that performance.”

With the rain clearing into the closing stages of qualifying, Norris said that it was important to preserve tyre life for that crucial time.

He also praised his McLaren team for feeding through the correct information when he needed it.

Asked which areas of the track were particularly tricky in those conditions, Norris replied: “Just there’s a few corners where it’s like if you don’t have the right angle with the right revs and speed and everything, you just aquaplane, you hit the pedals slightly wrong is a good three four tenths gone immediately which is what I did on my final lap.

“So tough especially because the conditions are getting better and better, through the whole qualifying, you need to kind of save the tyres in the beginning to be able to push at the end, which is never an easy thing to do to always kind of save everything for those last few laps, but I did a good job and I felt the team did a good job with giving me the correct information.”

It was a far more bleak session for Daniel Ricciardo in the other McLaren who is set to start from P14.

The Aussie has trailed Norris comfortably for much of the weekend and said that once the rain got heavier in the latter stages of Q2, it meant that his chance to progress to Q3 had gone.

“I don’t want to be 14th, so I think it was just one of those ones where you needed to get it in I think in the first two laps,” he said.

“I don’t think in the first lap, it was still quite a bit wetter, but then I think the second lap was the one because then it rained a lot. Well, it’s hard to see spray or rain, but the track got a lot wetter so it definitely rained in the second sector, so that dry line disappeared.

“And the lap that let’s say was meant to be the one, I remember going wide or off and let’s say lost the lap, so yeah, that was the one that it needed to be in the end. Obviously frustrated with that. But it’s all good. We’ll pick it up tomorrow.”