Lando Norris: FIA must start listening to drivers over safety 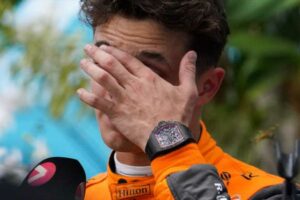 Lando Norris says the FIA has to start listening to the drivers, especially when it comes to safety, as crashes have “major consequences”.

And while the track surface created a lot of the headlines, the drivers weren’t happy in general with its safety.

Carlos Sainz crashed in Friday’s second practice, the Ferrari driver hitting the barrier at Turn 13. Rather than it being a tecpro barrier, it was a concrete wall.

The drivers raised that with the FIA during Friday evening’s briefing but nothing was done.

The following day Esteban Ocon crashed at the same spot, the Alpine driver hitting the wall with an impact of 51G.

Ocon has said that the impact of the crash in FP3 was measured at 51G! 🤯#F1 #Formula1 #MiamiGP #EstebanOcon #Alpine #Motorsport pic.twitter.com/lj29fqnC5q

Although Ocon walked away unhurt, the same cannot be said of his chassis with the Frenchman out of qualifying as a result of the damage.

He called it “unacceptable” with Norris saying the FIA has to start listening to the drivers as they have understand these sort of things better than the people designing the circuits.

“We learn from mistakes, and I hope the FIA ​​learns from what happened in Miami,” he said as per Motorsport.com.

“As drivers, we understand things differently than the people who don’t drive these cars.

“When we give advice, it is important that it is taken into account and action is taken. Especially when it has major consequences, such as with this tecpro.

“It happened once, we said something about it and nothing happened. It happened again and the consequences were even more severe.

“One just has to listen to us. We are the ones driving the cars. We know more about many things than they do, about some things they know more. We just need to work better together.”

The McLaren driver added that it was “a significant safety issue” and “an expensive one, Esteban’s chassis has been written off. They just need to take more action.”

As for Sainz, he wasn’t impressed that his advice wasn’t heeded.

“I mean, I’m sorry to be critical but I told the FIA my crash in second gear shouldn’t feel that hard, but today my neck was a bit in pain,” Sainz told Sky F1.

“I told them ‘let’s put Tecpro there’ because it’s [a] very hard concrete wall. Esteban went to crash and I’m pretty sure he felt it too.

“It’s one of those things I will never understand. I did bring it up already, [but] no change.”