Lando Norris 'didn't mean to do anything aggressive' to Carlos Sainz 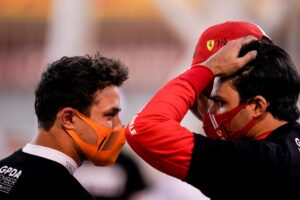 Lando Norris said he didn’t mean to show any aggression to former team-mate Carlos Sainz, with the Briton penalised for a late defensive move against the Ferrari man.

The McLaren driver was shown the black and white flag after a second move under braking that meant the Spaniard had to take evasive action on his way to passing Norris, who was running on much older tyres than Sainz at the time.

Both Norris and Sainz finished behind their team-mates in the Spanish Grand Prix, but the McLaren man was quick to hold his hands up and admit where he had gone wrong in his defence of his position.

“I need to look at it from birds-eye view but I think that’s when I defended to Carlos, I moved over and then I moved over again slightly, which you’re not really allowed to do,” Norris told Sky Sports.

“I didn’t mean to do anything aggressive, I knew he was coming past but that’s just the way it is, it didn’t mean anything.”

Sainz gets past Norris and moves up to P8#SpanishGP 🇪🇸 #F1 pic.twitter.com/JIt5bKoDNo

Sainz said that the move on his former team-mate was only possible because of how much fresher his tyres were, after he and Daniel Ricciardo took an extra stop in their race-long fight to secure P6 behind the Red Bull of Sergio Perez.

Norris had already let his faster McLaren team-mate by and then had to defend against the Spaniard, but Sainz told Sky Sports that his reflexes meant the pair did not collide on their way to Turn 1.

“No he didn’t [make it easy],” said the Ferrari driver. “He moved a bit on the limit, a bit late, I just reacted enough to make it stick. Lando I could overtake because we had a big tyre delta.

“Daniel [Ricciardo], we were on the same age tyres for the whole race, I was three or four tenths quicker but that is not enough to overtake around here – especially with that PU [power unit] they have in the back of that car this year.

“The acceleration they were getting out of [Turn] 15 was quite impressive and I couldn’t pass Daniel, I couldn’t pass Ocon on track so I had to do it with strategy; it was a bit of a shame.”