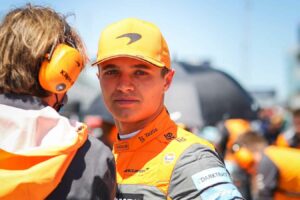 Lando Norris has agreed with comments from Max Verstappen that a salary cap in Formula 1 could end up hurting investment in junior drivers.

Verstappen has been one of the most outspoken opponents of a potential salary cap for drivers, dubbing wage limits “completely wrong”, as debate continues about whether drivers’ earnings should become included in the teams’ annual budget restrictions.

The reigning World Champion signed a mega seven-year contract with Red Bull after winning his title, and reasoned that a salary cap would go against the profits the drivers themselves bring to the teams, be it through use of image rights, merchandise sales, and the popularity of the sport itself.

He also thinks it could count against the next generation, too.

The Red Bull driver said: “In all the junior categories, if you see how many of those drivers have a sponsor or backer, who eventually will have a certain percentage of their income in potentially Formula 1 or whatever, I think it’s going to limit that a lot, because they will never get their return, in money, if you get a cap.”

Norris, sat next to Verstappen at the same press conference, agreed – believing that the need for a return on investment for financial backers could hamper drivers receiving sponsor income in the first place.

“I think Max explained it well, really – mainly because I’ve not had to think about it probably as much as him,” Norris added.

“So, I think what he said is correct, and especially with the investment part into young drivers. It’s difficult enough to get into Formula 1 at all, so as soon as you have the backing, where you have an investor, as a driver.

“They obviously want their money back at some point and you’re going to have to do that. If it gets capped, and so on, it’s much harder, and will interest people much less to ever invest into young drivers and invest into people having chances to get to Formula 1 in the first place.

“So, I think that’s probably one of the main points. But Max has probably thought about it much better than me – and therefore his answer is better.”

After signing a contract extension with McLaren last year, Norris was rewarded with a standout season with the team by being given a fresh long-term deal that will see him be a McLaren driver until the end of 2025 – which has reportedly put him among the sport’s highest earners in the process.